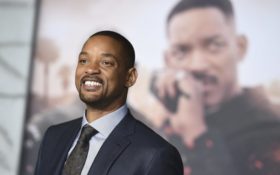 Will Smith can’t wait for Disney’s remake of “Aladdin.”

The star on Wednesday revealed the live-action musical’s first poster. Looking similar to the 1992 Robin Williams film, the poster features an ornate lamp and blue smoke along with the words: “Choose wisely.” The film’s release date of May 2019 also is listed.

Smith, who plays the Genie, wrote on Facebook: “LEMME OUT! Can’t wait for y’all to see Me BLUE.”

Naomi Scott, who played the Pink Ranger in the 2017 “Power Rangers” movie, is Princess Jasmine in the film, directed by Guy Ritchie.