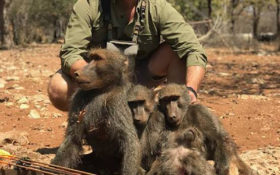 A top Idaho wildlife official has resigned amid outrage over a photo of him posing with a baboon family he killed during a hunting trip Africa, ending days of turmoil for a state where big game hunting is popular but critics said the photo was seen as unsportsmanlike by hunting enthusiasts.

Idaho Gov. C.L. “Butch” Otter said in a statement that he asked for and accepted Blake Fischer’s resignation on Monday, three days after the Idaho Statesman newspaper published the first report about a photo of Fischer smiling with four dead baboons propped in front of him.

The photo and others of Fischer and his wife shooting at least 14 animals in Namibia were accompanied by descriptions in an email that Fischer sent to more than 100 recipients. Fischer has said he did nothing illegal, unethical or immoral.

He didn’t apologize for killing the baboons but said in his resignation to Otter that he “recently made some poor judgments that resulted in sharing photos of a hunt in which I did not display an appropriate level of sportsmanship and respect for the animals I harvested.”

The baboon family photo showed blood visible on the abdomen of the smallest baboon, its head lolling back to rest on the chest of one of the dead adult baboons. Fischer killed them using a bow and arrows, visible in the bottom of the picture.

It drew condemnation from longtime Idaho hunters, including Otter, who is 76 and said Tuesday that he has “hunted and fished all my life.”

“I would never have done that, and I would never encourage anybody to do that,” Otter told The Associated Press in an interview.

The photo of Fischer with the dead baboons hurts Idaho’s reputation as a hunting and fishing paradise, Otter said.

“I think it’s tainted,” he said. “Fortunately, he has resigned. We’d like to get this behind us because this is not us.”

Fischer was one of seven members on the Idaho Fish and Game Commission. Otter appoints commissioners and under Idaho law can also remove them. Otter initially appointed Fischer in 2014 and reappointed him in June to a second four-year-term.

“I have high expectations and standards for every appointee in state government,” Otter said. “Every member of my administration is expected to exercise good judgment. Commissioner Fischer did not.”

Fischer and his wife during their Africa trip also killed a giraffe, a leopard, an impala, a sable antelope, a waterbuck, a kudu, a warthog, a gemsbok (oryx) and an eland.

Fischer has a business in southwestern Idaho that sells irrigation products used by ranchers and farmers. He did not return a telephone message seeking comment that was left at his business on Tuesday.

Most of the photos with the animals were posed, like typical big game hunting photos from Idaho and other western U.S. states showing hunters with dead deer, elk and mountain lions.

After the baboon photo was made public, at least two former Idaho Fish and Game Commission members to call for Fischer’s resignation.

“Sportsmanlike behavior is the center pin to maintaining hunting as a socially acceptable activity,” former member Fred Trevey said in an email.

The commission Fischer served on makes policy decisions about Idaho’s wildlife, and it often manages game populations through hunting and fishing regulations.

Those regulations are intended promote ethical wildlife hunting. Some of Idaho’s policies, such as on wolf and grizzly bear hunting, have been challenged in federal courts.

Otter said he has received several applications to fill the open commission seat but had no timeline for naming a new commissioner.