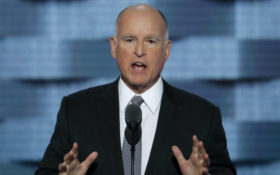 As fast-moving fires began to burn through California’s wine country Sunday night, authorities tried to alert residents using a variety of methods. Many of them failed completely.

Now, state officials are promising to evaluate why their emergency alert system failed – but to some critics, it’s too late.

Conservatives have often criticized California’s Democratic Gov. Jerry Brown for focusing his energy outward instead of focusing on the state’s infrastructure and preparedness.

For months, it seems it has been more important to Brown to gain cheap political points battling with President Donald Trump than focusing on his citizen’s needs.

Dozens of citizens paid the price for that with their lives this week.

Trump had previously threatened to defund California, complaining they were misusing billions on liberal policies like sanctuary cities instead of building or maintaining critical infrastructure. Trump called California’s spending “out-of-control” and warned that Brown’s administration was on a “collision course” with disaster.

Clearly, Brown has not changed his focus, making liberal policy changes like gender pronoun usage – not real issues like emergency preparedness – the focus of his administration.

In fact, this isn’t the first time Brown’s emergency preparedness has been criticized in 2017. In February, the governor’s misuse of budgetary spending helped lead to the Orville Dam spillway disaster, according to The Washington Times.

Without the Trump administration’s intervention and $162 million in federal funds, the dam would have almost certainly collapsed and killed thousands of Americans.

Brown should have learned from this near-miss and focused his energy on improving state readiness.

He didn’t. Apparently fighting to protect illegal immigrants was more important than focusing on the safety of American citizens.

This time, no one could bail out Brown in time. The emergency alert system in California wasn’t adequate and failed to warn residents in time.

23 people are dead because of this failure.