Wild weather a mixed bag in Northwest - The Horn News 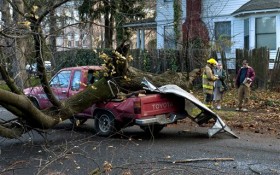 The storms that killed at least two people in Oregon this week were easing a bit, but forecasters said mudslide danger on the saturated hills would remain high through the weekend.

A rain-soaked hillside collapsed Wednesday north of Portland, Oregon, on the main highway connecting Washington and Oregon, stranding thousands of motorists on Interstate 5. Road closures in both states frustrated drivers who were trying to navigate alternate routes taking them hours out of their way.

“It was crazy and I was scared,” said Diane Smith of Lacey, Washington, who was stuck for three hours behind the landslide on I- 5 about 26 miles north of Portland, and then drove a steep, windy mountain road to get around the slide.

Smith said her detour onto the Green Mountain Road above Woodland, Washington, was by accident. After she followed directions and left the freeway, it wasn’t clear which of three routes to take. 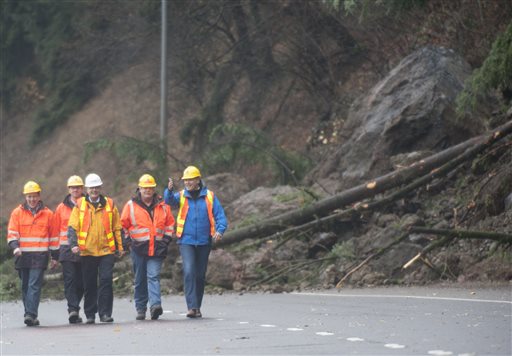 Washington Gov. Jay Inslee, right, is briefed by department of transportation officials as they survey the scene of a mudslide obstructing the northbound lane of Interstate 5 near Woodland,, Was., Thursday, Dec. 10, 2015. Boulders, trees and dirt slid onto the highway in the day before following heavy rains. (Natalie Behring/The Columbian via AP)

Smith, who was driving her 6-year-old grandson and his other grandma back from Vancouver, Washington, probably made the wrong choice, according to the Washington Department of Transportation. Officials used social media to discourage drivers from taking the mountain road without guardrails around the slide, but as Smith points out, she was driving, not checking her cellphone for updates.

“It was scary. I was like ‘Oh, my gosh’,” she said, adding that she wasn’t sure if she was going the right way until she made it back to the freeway.

Her grandson declared the experience an adventure to remember.

The massive landslide blocked the interstate lanes Wednesday afternoon after a hillside of rocks and dirt collapsed after days of pounding rain. Two lanes were back open by Thursday night and officials said they hoped to have all three reopened by late Sunday.

More rain is on the way through the weekend.

The moisture is helping to fill reservoirs earlier and recharging the groundwater, said Scott Pattee, water supply specialist with the Natural Resources Conservation Service based in Mount Vernon.

But “a lot of this rain is going down hard so it’s flowing straight through the snowpack, and it’s not adding to it,” he added.

Much of Washington’s water supply depends on mountain snowpack that builds over winter, and melts in spring and summer.

The latest report from the U.S. Drought Monitor Thursday showed the area west of the Cascade Mountains in Washington is no longer in drought.

The storms also spawned a tornado that touched down at about 11:15 a.m. Thursday in the southwest Washington city of Battle Ground, National Weather Service officials in Portland said.

More storms are coming, but nothing as strong as earlier this week. Steady rain of the usual winter variety is expected in Oregon and Washington over the next few days. The major storms have shifted south into California.