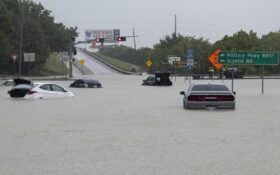 Heavy rains across the drought-stricken Dallas-Fort Worth area on Monday caused streets to flood, submerging vehicles as officials warned motorists to stay off the roads and water seeped into some homes and businesses.

“The Dallas-Fort Worth area was pretty much ground zero for the heaviest rain overnight,” said Daniel Huckaby, a meteorologist with the National Weather Service.

The official National Weather Service record station at Dallas-Fort Worth International Airport reported 9.19 inches (23 centimeters) of rain in the 24 hours ending at 2 p.m. Monday. That ranked second for the top 10 most rain over 24 hours in Dallas on record. The most was 9.57 inches (24.3 centimeters) that fell Sept. 4-5, 1932.

“We’ve been in drought conditions, so the ground soaked up a lot of it but when you get that much rain over that short a period of time, it’s certainly going to cause flooding, and that’s what we saw, definitely in the urban areas here,” Huckaby said.

Across the area, rainfall amounts ranged from less than 1 inch (3 centimeters) to over 15 inches (38 centimeters), said National Weather Service meteorologist Sarah Barnes. By Monday afternoon, the rain had moved out of the area, she said.

“There was quite a bit of variation in the rainfall totals,” Barnes said.

At least one fatality was blamed on the downpours as emergency responders across the area reported responding to hundreds of high-water calls. A 60-year-old woman was killed in the Dallas suburb of Mesquite when flood waters from South Mesquite Creek swept her vehicle from Texas 352 westbound at Interstate 635, officials said.

This flooding in Dallas is crazy 😳
Everyone stay safe out there pic.twitter.com/q4KvBEvvQA

Flood waters have receded from I-30, I-45 interchange in #Dallas. Traffic is a nightmare this morning. Crews are hauling our stalled vehicles. I’ll have live updates at the top of the hour throughout the morning on @accuweather #txwx pic.twitter.com/kJnapmBha8

Dallas County Judge Clay Jenkins, as presiding officer of the Dallas County commissioners, declared a disaster had occurred in the county and requested federal and state assistance for affected individuals.

In Balch Springs, a Dallas suburb where last month a grass fire that started in a tinder-dry open field damaged over two dozen homes, officials on Monday rescued people from flooded homes. Fire Chief Eric Neal said they rescued four people from one flooded home and one person from another.

“We had to get to them by boat and pull them to safety,” said Neal, who added that others chose to stay in their flooded homes.

“As the rain stopped, the water started to recede pretty quick,” Neal said.

At White Rock Lake in Dallas, where the water level has been low through the baking summer months, people with umbrellas and water-proof jackets braved the rain Monday morning to watch the deluge transform the lake’s previously dry concrete spillway into what looked like a roaring river.

Trenton Cody, 29, said he drove over Monday morning to take a look at the effect the floodwaters were having on the lake’s dam.

“It looks like we’re high in the mountains somewhere with some like Class V rapids, which is crazy,” Cody said.

Huckaby said that the flooding started overnight on streets and interstates.

“It fell very, very quickly,” Huckaby said. “We had some locations there in Dallas that had more than 3 inches (8 centimeters) of rain even in one hour.”

He noted that with so much concrete in urban areas, “there’s just only so much that the drain systems can handle.”

The water seeped into some businesses. Peter Tarantino, who owns Tarantino’s Cicchetti Bar and Record Lounge in Dallas, told The Dallas Morning News that about 6 inches of water flowed into the dining room, but had receded by late morning.

He said he may be able to salvage the furniture but he’ll need to replace rugs and carpets.

“I’m hoping by Thursday we’ll be able to open up the bar with a few snacks,” he told the newspaper. “I don’t give up too easily.”

Dallas County Judge Clay Jenkins said on Twitter that based on preliminary damage assessments, he was declaring a state of disaster in Dallas County and requesting state and federal assistance.

Meanwhile, the weather caused hundreds of delays and cancellations in and out of Dallas-Fort Worth International Airport and at Dallas Love Field.

With the amount of rain that fell Monday, this August now ranks as the second-wettest on record for the area. As of 2 p.m., the National Weather Service reported total rainfall for August of 10.08 inches (25 centimeters) at Dallas-Fort Worth International Airport. The wettest August was 10.33 inches (26 centimeters) in 1915.

“It will probably put a small dent on the drought I would imagine but I don’t think it’s going to get rid of it by any means,” Barnes said.

She said that over the next week, there are only low chances of more rain.

Farther west, about 60 people were forced to evacuate after a levee was breached Monday in a small town near the Arizona-New Mexico state line. That followed a weekend of of flash floods across the Southwest that also swept away one woman who is still missing in Utah’s Zion National Park.