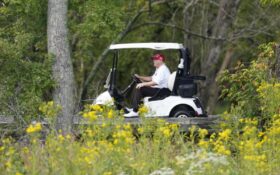 Former President Donald Trump’s visit to Washington, D.C. on Monday caused a firestorm of conspiracy theories among liberals on the internet.

Trump had been secretly arrested by the FBI, some claimed, and was being escorted to jail.

Or, perhaps Trump was on death’s door and was being rushed to Walter Reed hospital for emergency care, on user wondered.

Turns out Trump was heading to visit his golf course in Virginia, presumably to play golf.

But observers noted that it wasn’t a particularly good day for golf — it was rainy and cloudy all day in the mid-Atlantic region.

When Trump was spotted on the golf course without golf clubs, a brand new set of wild conspiracy theories went viral online.

He wasn’t arrested by the FBI, and the former president wasn’t being rushed to the hospital for emergency surgery… now the conspiracy theorists claimed Trump was secretly meeting with allies like Fox News’ Sean Hannity, House Minority Leader Kevin McCarthy, former Rep. Devin Nunes, and more.

Too scared to hold the meeting inside over fear of wiretaps, the unhinged conspiracy theory claimed, Trump and his allies had to retreat in secret to the golf course.

“Look at the photo. They’re all shook. Something new must be about to come out and they’re figuring how to spin it. They’re likely aligning stories and figuring out the plan to gaslight. Whatever the MAGA loyalist start pushing that’s new is the thing,” one user claimed.

“That is a group of people having a discussion in a place they are fairly sure isn’t bugged Why would they be concerned about bugs? Not sure really, but there’s no way they just randomly decided to stand there and chat……in the rain,” another said.

Many are asking me why Mr. Mushroom Putter was at his DC Golf Course (which is really in Virginia)? He says to play golf. My sources say he was meeting with 2 lawyers in secrecy and didn’t trust being at their offices. Notice there are no golf clubs on the cart!!! pic.twitter.com/KOvzgD2mxC

So what was Trump actually doing in this secret, panicked meeting with GOP leadership and Fox News hosts?

First of all, only Eric Trump was there among the people listed.

McCarthy, Nunes, Hannity, the reanimated corpse of Saddam Hussein, and Beelzebub were not actually in attendance.

But there was Brad Enie.

He is the director that oversees the grounds for Trump National Golf Club Washington D.C.

And he wasn’t caught on camera convincing a secret, mafia-like meeting or leading a Satanic cult in a ritual sacrifice.

Trump flew to Washington, D.C. to have a business meeting with his management team that run his golf and country club.

Unfortunately, it seems it was too rainy to really golf. So, the management team led by Trump went for a brief tour around the grounds.

None of those people listed in the tweet below are in those photos. Except for Eric Trump.

I do also see Brad Enie who oversees grounds for Trump National DC in those photos, however.

Yet many people are spreading this lie instead of focusing on the truth which is bad enough! https://t.co/yCKhJr51TJ pic.twitter.com/oc7xIjUV2E

How did The Horn News unravel the wild conspiracy theory so quickly?

We simply checked what Trump himself said about his plans.

“Working today at @TrumpWashingtonDC on the Potomac River. What an incredible place! trumpnationaldc.com/,” the 45th president announced on his Truth Social website.

Sorry, Twitter liberals, but that means the nuclear secrets probably aren’t buried in the sand trap near the 8th green.