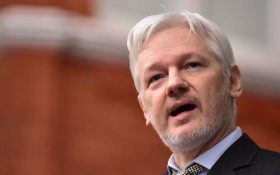 WikiLeaks just made an unexpected move that has stunned observers around the world – and speculation is running rampant that something big could be about to drop.

Julian Assange, the founder of the controversial whistleblowing website, has stepped down as the editor.

He’s been holed up in the Ecuadorian embassy in London, facing arrest by British authorities if he ever sets foot outside.

But Ecuador, likely bowing to pressure from the governments WikiLeaks has rocked, has cracked down on his ability to communicate with the outside world and earlier this year cut off his Internet access and limited his visitors.

As a result, he’s named a new editor to act in his place.

The organization released a statement saying in part:

“Due to the extraordinary circumstances where Julian Assange, the founder of WikiLeaks, has been held incommunicado (except for visits by his lawyers) for six months while arbitrarily detained in the Ecuadorian embassy, Mr. Assange has appointed Kristinn Hrafnsson editor in chief of WikiLeaks.”

Assange, the organization said, will retain his title as publisher.

Hrafnsson, an Icelandic journalist, served as spokesman for WikiLeaks from 2010 and 2016 and has continued to serve the organization in multiple roles.

“I condemn the treatment of Julian Assange that leads to my new role. but I welcome the opportunity to secure the continuation of the important work based on WikiLeaks ideals,” he said.

It’s not clear if the change of hands indicates a change of direction for WikiLeaks – or if it’s an indication that the organization is planning a new document dump as Americans get ready to head to the polls in a contentious midterm election.

And if they are planning a release, it’s not clear who or what would be the target.

After all, Assange and WikiLeaks have drawn both praise and ire from both sides of the aisle… often from the same people at different times.

Republicans railed against Assange after he published thousands of pages of confidential United States Army field reports on the War in Iraq.

Some went even further.

“I think it’s disgraceful,” Donald Trump said in 2010, six years before he was elected president. “I think there should be like death penalty or something.”

Leftists, however, ate it up, loving the embarrassment the leaks brought to the Bush administration.

By the 2016 election, the polarity completely shifted. Republicans praised and cited documents related to Hillary Clinton published by WikiLeaks as the left railed against Assange.

Hannity even has had Assange as a guest on his show!

However, Assange himself remains ensnared by legal and criminal complaints.

Initially, Sweden wanted him extradited there in relation to sexual assault allegations. They’ve dropped that investigation, but British authorities have said they still intend to apprehend Assange should he ever set foot outside of the embassy.

Assange and his supporters fear he would then in turn be extradited to the United States to face espionage charges, with the Justice Department saying they still plan to seek his arrest.