Why this GOP rising star was booed off Trump stage... (vid) - The Horn News 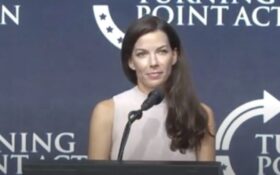 Shortly before former President Donald Trump addressed the Turning Point USA rally on Saturday, there was chaos on the main stage.

Arizona State Senator Michelle Ugenti-Rita found herself in the eye of an angry storm.

And she was booed off stage by conservatives in a viral moment that rippled across social media.

Her speech at the “Rally to Protect Our Elections” was immediately cut short just as soon as it began.

“Why don’t you listen to what I have to say?” she can be heard asking as the conservative supporters rained down a chorus of boos.

“It’s we the people, who are empowered by our founding––” she said, making several attempts to carry on.

Ugenti-Rita finally conceded and ended the speech, saying “Fine. I am running to be your next secretary of state, I’m going to win the primary, thank you very much.”

So what exactly did she do to provoke the crowd?

It wasn’t anything she said, according to Brahm Resnik, who shared the viral moment on Twitter.

Mediaite is speculating that it was something that took place long before the rally.

According to Mediaite sources, Ugenti-Rita sits on the Senate Government Committee, where she apparently voted with Democrats to kill a GOP election bill that was introduced in the state legislature.

So the crowd was “primed” to shower Ugenti-Rita with boos.

Based on her siding with the Democrats, Mediaite presumes that this is what had conservatives ready to pounce.

You can see the viral video below:

If she thinks she’s going to win the primary after this showing, perhaps she has a rude awakening ahead of her.