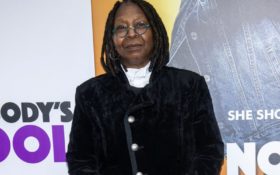 And while she hasn’t exactly offered up a late-life conversion to the “right” side of the aisle just yet, she just praised Fox News.

During a discussion of allegations in Ronan Farrow’s new book that NBC News tried to cover up rampant sexual harassment within the company, Goldberg pointed to another network facing similar allegations that didn’t run and hide.

As she pointed out, the network let go of some of its biggest names in the “purge” after sexual harassment allegations surfaced, including TV icon Roger Ailes and top-rated host Bill O’Reilly.

“You have to be willing to purge,” Goldberg said, adding that’s what’s made Fox News different here in the “Me Too” era. “They were willing to do that.”

While it’s doubtful the comments mean Goldberg is going to be a regular “Hannity” viewer anytime soon, she has in recent months taken more than a few positions that raised eyebrows among her leftist followers.

Last month, she lit into liberal actress Debra Messing, who had called for a list of entertainment figures who support Trump.

“I have the right to not go see (pay for) a movie with someone supporting babies in cages,” Messing wrote on Twitter. “It is First Amendment. Information, Knowledge. That is how we make decisions.”

Goldberg wasn’t having it.

And more recently, she had some relatively kind words for those on the right.

“There are some conservatives that have done some really good stuff,” she said, specifically naming former President George W. Bush.

While she said Bush “did a lot of stuff I didn’t like,” she admitted he was right on at least one major issue still in the headlines today.

“Something he did do was he had a smart idea: How to deal with immigration,” she said. “I liked that.”

Of course, she couldn’t stop there and leave well enough alone.

Right after praising a conservative, she went back on the attack.

She said GOP lawmakers “pooped all over” Bush’s immigration plan and that “it didn’t happen” as a result, conveniently forgetting the Democrats’ unwillingness to compromise on the issue as another key factor in the failure of immigration reform.

Goldberg also defended talk-show host Ellen DeGeneres for sitting next to Bush at a football game – a scene that sent liberals in a tizzy.

She said that if Bush was the homophobe the left has made him out to be, it would’ve been a perfect opportunity for some very public trolling by DeGeneres.

“These are two gay women. If he has got a problem, he’s going to be real uncomfortable,” she said. “I would be leaning on him. I would be just hugging him. I would be messing with him because if you have the opportunity to take a second to show people your humanity, why wouldn’t you try?”

Bush of course, didn’t seem uncomfortable at all.

To the contrary, he seemed to be having the time of his life.

And DeGeneres later slammed the liberals who tried to make her feel guilty about her friendship with the former president.

She also said her regular calls for kindness apply to everyone.

“When I say be kind to one another, I don’t mean only the people that think the same way that you do,” she said, in the kind of comments that show why her daytime broadcast is such a crossover success. “I mean be kind to everyone.”

Yes, Ellen DeGeneres and Whoopi Goldberg… two icons of the Hollywood liberal left…not only cozying up to conservatives, but getting a distinct soft spot for President Bush.

Could they soften on Trump next?

Probably not… but then again, no one would have said that about them and Bush 15 years ago either.