Whoa! You'll never believe how many wings this champ ate - The Horn News 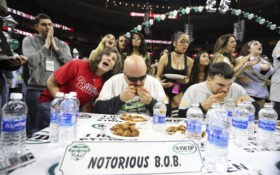 Even with the slogan “if you heave, you leave,” the event included some romance. One contestant proposed to his girlfriend after he was ejected from the eat-off. She said “yes.”