Whoa baby! Baseball crowd grows by one in third inning - The Horn News 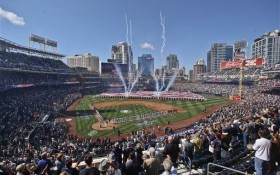 Great catch, doc. A woman who went to see the San Diego Padres left as a brand new madre, thanks to the quick actions of the Petco Park medical staff.

Petco Park announced that a baby boy was born during Thursday night’s game against the San Francisco Giants, the first in the ballpark’s 11-season history.

Capt. Joe Amador of the city’s Fire-Rescue Department tells the San Diego Union-Tribune (http://bit.ly/1KFDBNo) that the baby and mother were taken by ambulance from the park to Kaiser Permanente San Diego Medical Center.

Amador says firefighters had been called for pregnancy medical aid, but the park’s own medical system took care of the birth.

The Padres later tweeted that a great crowd of 31,137 enjoyed the game. Those figures don’t include the baby boy born around the third inning.