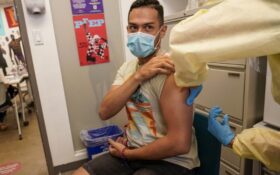 The number of monkeypox cases reported globally dropped by 21% in the last week, reversing a month-long trend of rising infections and a possible signal the outbreak in Europe may be starting to decline, according to a World Health Organization report issued Thursday.

The U.N. health agency reported 5,907 new weekly cases and said two countries, Iran and Indonesia, reported their first cases. To date, more than 45,000 cases have been reported in 98 countries since late April.

In early July, just weeks before the agency declared the international spread of the disease to be a global emergency, WHO’s Europe director said countries in the region were responsible for 90% of all laboratory confirmed cases of monkeypox.

British health authorities said last week after seeing a decline in the number of new cases getting reported daily that there were “early signs” the country’s monkeypox outbreak was slowing.

The U.K.’s Health Security Agency downgraded the country’s monkeypox outbreak last month, saying there was no evidence the once rare disease was spreading beyond men who were gay, bisexual or had sex with other men.

Since monkeypox outbreaks in Europe and North America were identified in May, WHO and other health agencies have noted that its spread was almost exclusively in men who have sex with men.

Monkeypox has been endemic in parts of Africa for decades and experts suspect the outbreaks in Europe and North America were triggered after the disease started spreading via sex at two raves in Spain and Belgium.

WHO’s latest report said 98% of cases are in men and of those who reported sexual orientation, 96% are in men who have sex with men.

“Of all reported types of transmission, a sexual encounter was reported most commonly,” WHO said. “The majority of cases were likely exposed in a party with sexual contacts,” the agency said.

Among the monkeypox cases in which the HIV status of patients was known, 45% were infected with HIV.

WHO has recommended that men at high risk of the disease temporarily consider reducing their number of sex partners or refrain from group or anonymous sex.

Monkeypox typically requires skin-to-skin or skin-to-mouth contact with an infected patient’s lesions to spread. People can also become infected through contact with the clothing or bedsheets of someone who has monkeypox lesions.

With globally limited vaccine supplies, authorities in the U.S., Europe and the U.K. have all begun rationing doses to stretch supplies by up to five times.

WHO has advised countries that have vaccines to prioritize immunization for those at high risk of the disease, including gay and bisexual men with multiple sex partners, and for health workers, laboratory staff and outbreak responders.

While Africa has reported the most suspected deaths from monkeypox, the continent has no vaccine supplies apart from a very small stock being tested in a research study in Congo.

“As we know, the situation with monkeypox vaccine access is very topical, but there are not enough doses of vaccines,” Nigeria Center for Disease Control Director-General Ifedayo Adetifa said this week. Potentially, a lot more more doses will become available, but because of challenges with manufacturing factories and unexpected uptick in monkeypox cases, the vaccine may actually not be available until 2023.”