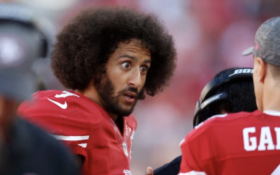 Senator Marco Rubio has once again strayed away from his conservative roots and defended the very liberal former NFL quarterback Colin Kaepernick.

Rubio not only supports Kaepernick’s right to disgrace our nation’s national anthem, but also thinks that he deserves to be placed back onto an NFL team.

When asked if he thought owners colluded against Kaepernick to keep him out of the NFL, Rubio responded, “Well, I don’t know what the owners did. I think he’s certainly … what is it … 64 quarterbacks in the NFL? There aren’t 63 people better than him,” Rubio told TMZ Sports.

Despite what Rubio may believe, football experts say that Kaepernick is not being picked up by an NFL team because he is not a good enough player.

The former quarterback created headlines for the San Francisco 49er’s after starting a protest against police by taking a knee during the national anthem.

Kaepernick is not only a bad player, but he also has created a lot of controversy — and if owners want to sell tickets, they’re wise to steer clear of the disgraced quarterback.

Kaepernick is not only disrespecting our country when he protests the anthem, but he is also protesting anyone who has ever fought for our country — and that type of nasty divisiveness does not belong on the field or in the league.