Who IS the Kentucky clerk in the middle of the gay marriage debate? - The Horn News 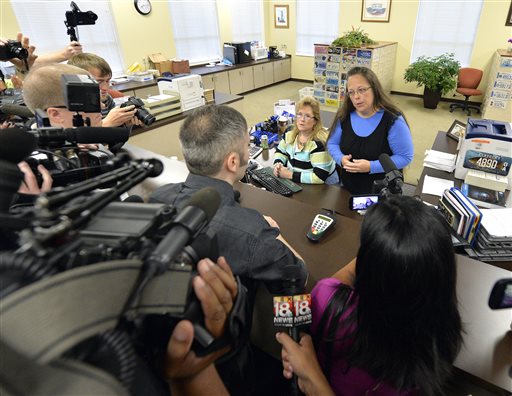 The fight for religious freedom against government intervention continues in Kentucky. Kim Davis, the Rowan County, KY clerk, has defied a court order to issue marriage licenses to gay couples. Now she’s being summoned to court to answer to the Feds. How did it come to this?

It started about four years ago, when Davis sat in a church pew on a Sunday listening as the man in the pulpit preached of forgiveness and God’s grace.

Davis was then an unlikely candidate to wage a moral war over the institution of marriage. At 44 years old, she had been divorced three times and had two children out of wedlock.

But that Sunday morning, as the preacher spoke from the book of Galatians, she repented and pledged the rest of her life to the service of the Lord.

Now as the Rowan County clerk, Davis is refusing to surrender in a battle of national morality. She invoked “God’s authority” Tuesday as she defied a series of federal court orders and once again denied marriage licenses to same-sex couples.

Since the Supreme Court legalized gay marriage across the nation, Davis refuses to relent, even under the threat of a contempt of court charge, steep fines or jail time.

“She has found herself in a situation she never envisioned,” said Mat Staver, founder of the Christian law firm Liberty Counsel that is representing Davis in her bid to refuse marriage licenses.

Four couples, two gay and two straight, sued her, arguing she must fulfill her duties as an elected official despite her personal Christian faith. U.S. District Judge David Bunning ordered her to issue the licenses, an appeals court affirmed that order, and the Supreme Court on Monday refused to intervene, leaving her no more legal options.

“It is a heaven or hell decision,” she said in a statement.

Bunning has ordered Davis and her six deputy clerks to appear before him Thursday morning at the federal courthouse in Ashland, where she will face legal judgement.