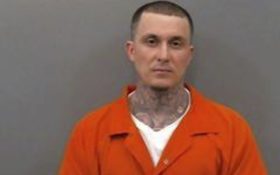 The leader of a white supremacist gang that has been accused of a string of brutal tactics escaped a local Arkansas jail Wednesday along with another inmate, and authorities searching for the men said they’re considered armed and dangerous.

The U.S. Marshals Service said authorities were searching for Wesley Gullett and Christopher Sanderson after the pair escaped from the Jefferson County jail in Pine Bluff, which is about 38 miles (60 kilometers) south of Little Rock. Marshals said they were notified about the pair’s escape at 4:30 a.m. Wednesday, but did not know exactly when they escaped.

Gullett, 30, is among 54 members of the New Aryan Empire who have been indicted on federal charges and is listed in court documents as the gang’s “outside” president who oversaw all gang activities by members who weren’t in prison. Prosecutors say the gang has about 5,000 members.

Sanderson, 34, was being held in the jail on federal gun and drug charges.

Supervisory Deputy U.S. Marshal Kevin Sanders said authorities have no reason to believe the pair left the state and that multiple agencies across Arkansas are looking for them. Sanders declined to say how the two escaped.

“We were made aware this morning of the inmates’ escape and are working with our federal, state, and local law enforcement partners to secure their return into custody,” Cody Hiland, the U.S. attorney for the eastern district of Arkansas, said in a statement.

A spokeswoman for the Jefferson County Sheriff’s Office did not immediately respond to an email Wednesday afternoon.

Prosecutors say New Aryan Empire began as a prison gang in the 1990s but now engages in narcotics trafficking, witness intimidation and acts of violence, including attempted murder, kidnapping and assault. Indictments were originally returned in 2017 accusing 44 members of the gang with drug and gun crimes, but additional members were named in February for alleged involvement in violent crimes committed by the group.

Gullett is accused in the indictment of attempting to kill Bruce Wayne Hurley, of Atkins, who told law enforcement about an associate of the gang’s drug dealing. Hurley was shot dead at his home in May 2016, but the indictment never says who authorities believe killed him.

A magistrate judge in March rejected Gullett’s request for a temporary release to attend his father’s funeral after prosecutors said he posed a “serious danger to the community” and was a flight risk.