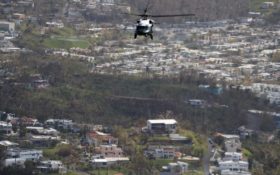 The Trump administration is finalizing a $29 billion disaster aid package that combines $16 billion to shore up the government-backed flood insurance program with almost $13 billion in new relief for hurricane victims, according to a senior administration official and top congressional aides.

The huge request is expected to be officially sent to Congress on Wednesday, but its outlines were characterized by officials who demanded anonymity because the $29 billion measure is not yet public.

The request would address two urgent needs. The first is to pump money into the flood insurance program, which is rapidly running out of cash to pay an influx of claims from victims of hurricanes Harvey, Irma, and Maria. At the same time, the Federal Emergency Management Agency continues to spend money for disaster relief operations at a high rate and requires more money.

The government-guaranteed flood insurance program is maxing out on a $30 billion line of credit from Treasury; the upcoming proposal would wipe $16 billion of that debt off the books to permit the program to pay claims from hurricane victims.

Almost $13 billion is being requested for FEMA, and federal firefighting accounts would receive $577 million as well to replenish them after a disastrous season of Western wildfires.

“This is going to be extraordinarily expensive and I think we need to get some money out there,” said House Appropriations Committee Chairman Rodney Frelinghuysen, R-N.J.

House Majority Leader Kevin McCarthy, R-Calif., said he had met with lawmakers from Texas and Florida on Tuesday to brief them on the White House request.

“Remember, this is emergency money. You’ve got to deal with the problem,” McCarthy told reporters. “So I think we’ll be able to get this done.”

The request could prove controversial, especially the huge infusion into the flood insurance program. Conservatives are likely to liken it to a taxpayer bailout, but the program is enormously important to homeowners in hurricane-ravaged Texas and Florida, as well as other coastal states.

Congress is in the midst of an effort to reauthorize the troubled flood insurance program, which critics say makes taxpayers subsidize properties that have repeatedly flooded. A bipartisan effort to reform the program was enacted in 2012 but was significantly watered down just two years later after widespread complaints of huge premium increases and resulting disruptions in coastal real estate markets.

Later this year, the White House is expected to require tens of billions of dollars more in long-term funds that would rebuild infrastructure, help people without insurance restore their homes, and, perhaps, help Puerto Rico reconstitute its shattered electrical grid.

Trump surveyed Hurricane damage in Puerto Rico on Tuesday. He praised his administration’s response, even as lawmakers returning from the island say the president is painting far too rosy a picture.

“What you’re seeing is a mirage,” Rep. Luis Gutierrez, D-Ill., said of conditions in San Juan, where Trump visited and where many reporters are located. Many mountain towns are cut off, with sick and elderly people trapped. “I saw the video on TV and everybody’s friendly and everybody’s smiling. You know what? It gave the wrong impression of what’s going on in the island.”