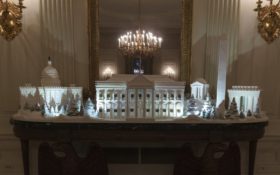 The pastry creation — featured at Monday’s unveiling of the White House holiday decorations — required 225 pounds of dough, 25 pounds of chocolate and 20 pounds of white icing. It includes replicas of the Capitol, the Lincoln and Jefferson memorials, the Washington Monument and the White House, complete with tiny green wreaths with red ribbons on each window.

White House pastry chefs have created gingerbread houses during the holidays since the early 1970s. The first one depicted a Christmas village. Another was a replica of President Bill Clinton’s boyhood home in Arkansas.

“American Treasures” is the theme of this year’s White House holiday decor, designed by first lady Melania Trump, who tweeted a video showing her walking amid the display. Decorations in the ornate East Room are meant to highlight the diversity and ingenuity of American architecture.

In the China Room there are three tables recreated from previous state dinners during the Theodore Roosevelt, John F. Kennedy and Trump administrations using, china and glassware from the White House permanent collection. A place card for President Donald Trump is next to one for “Mrs. Macron,” French President Emmanuel Macron’s wife, Brigitte.

Upstairs in the Green Room, there are decorations representing an American cornucopia with fruits, vegetables and grains adorning a tree.

The 18-foot official White House Christmas tree stands tall in the center of the Blue Room. The Fraser fir from North Carolina is decorated with more than 500 feet of blue velvet ribbon embroidered in gold with each state and territory.

The Red Room features ornaments and two wreaths made of pencils stamped with “Be Best,” Mrs. Trump’s youth initiative.

Patriotism is on display in the Grand Foyer and Cross Hall. More than 14,000 red ornaments hang on the branches of 29 trees. Hidden projectors cast silhouettes of pine and other holiday greenery on the ceilings.

From their portraits on the walls of the corridor, Presidents John F. Kennedy, Jimmy Carter, George H.W. Bush and Ronald Reagan gaze down on the holiday spectacle.