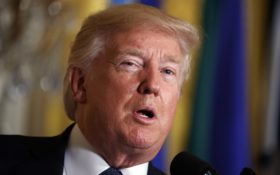 The White House is finalizing an executive order that would expand health plans offered by associations to allow individuals to pool together and buy insurance outside their states, a unilateral move that follows failed efforts by Congress to fix the healthcare system.

President Donald Trump has long asserted that selling insurance across state lines would trigger competition that brings down premiums for people buying their own policies.

White House actions may come too late to have much impact on premiums for 2018, but would help in 2019.

Trump was expected to sign the executive order this week, likely on Thursday, a senior administration official said Sunday.

Under the president’s executive action, membership groups could sponsor insurance plans that cost less because — for example — they wouldn’t have to offer the full menu of benefits required under the Affordable Care Act, also called “Obamacare.” It’s unclear how the White House plans to overcome opposition from state insurance regulators, who see that as an end-run to avoid standards.

“There are likely to be legal challenges that could slow this effort down,” said Larry Levitt of the nonpartisan Kaiser Family Foundation.

Similar alternatives have been promoted by Kentucky Sen. Rand Paul, a Republican holdout during the health care debate. Senate leaders didn’t bring the latest GOP health care bill to a vote because they lacked the votes to pass it.

Association plans “kind of went away with the ACA, and now the idea seems to be to re-create them,” said Jeff Smedsrud, a health insurance marketing entrepreneur. “It’s not clear what they would really look like.”

Smedsrud said a different option also under consideration by the White House, to loosen restrictions on “short term” insurance plans, could be a safety valve for some consumers.

Those plans generally have limited benefits and remain in force for less than a year. During the Obama administration, the availability of short-term coverage was restricted. One of Smedsrud’s companies sells short-term plans.

Others warned that over time the White House order could undermine state insurance markets created under Obama’s law, by siphoning off healthy people to plans with lower premiums and skinnier benefits.

The order was being drafted as Trump expressed his willingness to work with Democrats on healthcare after establishment Republicans were unable to approve legislation that would have repealed and replaced “Obamacare.”

The president said Saturday that he had spoken to Senate Democratic leader Chuck Schumer of New York to see if Democrats would want to collaborate with him on improving health care. He told reporters before departing for a North Carolina fundraiser that he was willing to consider a “temporary deal” and referred to a popular Republican proposal that would have the federal government turn over money for health care directly to states in the form of block grants.

Schumer said through a spokesman Saturday that Trump “wanted to make another run at ‘repeal and replace’ and I told the president that’s off the table.” Schumer said if Trump “wants to work together to improve the existing health care system, we Democrats are open to his suggestions.”

It was unclear if the expected White House order could lead to changes sweeping enough and quick enough to help several million consumers exposed to higher premiums next year for their individual health insurance plans.

“Whether this executive order could impact the 2018 market is yet to be seen, since the health plans have created and priced their 2018 products already, and open enrollment begins in just three weeks,” said health industry consultant Robert Laszewski.

While nearly 9 million consumers who receive tax credits under the Obama-era law are protected from higher premiums, about 6.7 million other customers with individual coverage get no subsidies and will bear the full brunt of cost increases that reach well into the double digits in many states.

Many in this group are solid middle-class, including self-employed business people and early retirees. Cutting premiums for them has been a longstanding Republican political promise.

“If the question is, is the president interested in working with Democrats to repeal and replace — that would be our language — the answer is yes,” White House budget director Mick Mulvaney said during an interview with NBC’s “Meet the Press.” ″The Democrats would use a different word for that, but the president wants to get something done.”