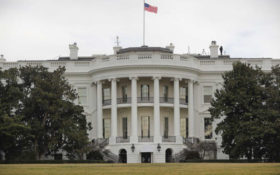 President Donald Trump was not in harms way, the Secret Service said — but they had to call in the bomb squad to be sure.

The Secret Service says they have taken a suspect into custody who was seen carrying a suspicious package near the White House. They swooped in and took action after he made suspicious comments to an officer.

A Secret Service official says an explosive ordinance team was on the scene on Tuesday morning to examine the package about a block from the White House.

A security perimeter was established near the White House grounds out of fear the package contained a bomb.

The investigation comes after two recent fence-jumping incidents at the White House.

Sponsored: 2 new strange words are on death certificates across America

A California man was charged with jumping the fence while carrying two cans of Mace, and a woman from Washington state got tangled up in her shoelaces trying to jump the fence last week.

Despite the incident, Secret Service officials said all other West Wing activity was able to proceed normally.