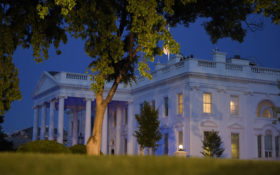 The White House was lit up in blue to honor the nation’s police officers.

The move on Monday night followed President Donald Trump’s remarks earlier in the day to police and families of fallen officers at the annual National Peace Officers’ Memorial Service outside the U.S. Capitol. Trump also signed a proclamation honoring police while surrounded by families of law enforcement in the Oval Office.

Former President Barack Obama declined a request from a union of federal law enforcement officers to have the White House lit in blue following the killings of five officers in Dallas last year. The administration at the time said he chose to honor the officers in other ways, including attending a memorial service, meeting with families and flying the White House flags at half-staff.