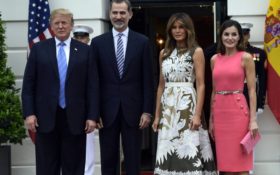 King Felipe described his first Oval Office meeting with the president as a “great end to a perfect visit.” The royals are in the U.S. to mark the 300th anniversaries of the founding of New Orleans and San Antonio, stopping in both cities with historical ties to Spain before arriving at the White House.

Trump called it “really a tremendous honor” to have the royal couple in the Oval Office.

The president also praised the “outstanding” relationship between the U.S. and Spain “over the years and, I think, especially right now. Excellent trade relationship, military relationship. Just about everything you can have. So we love Spain.”

Trade was expected to figure prominently in their talks. The king was expected to discuss concerns in Europe about the Trump administration’s decision to impose tariffs on steel and aluminum imports and U.S. tariffs on Spanish black olives.

The king and queen were expected to meet with congressional leaders later Tuesday.