Which presidential turkey will Trump pardon? - The Horn News 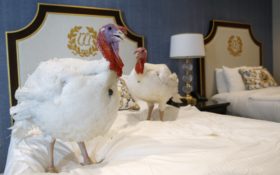 Which Thanksgiving turkey will earn a presidential pardon? Will it be Bread or Butter?

The White House is sponsoring an online contest to help President Donald Trump as he contemplates his role in the 30-year-old tradition of sparing the National Thanksgiving Turkey.

Trump will name the bird he’ll pardon Tuesday afternoon at the White House. Afterward, he’ll fly to Florida for a campaign rally and to spend Thanksgiving with his family.