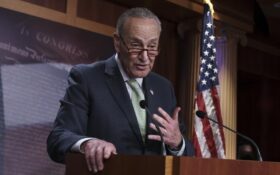 The entire country waits on pins and needles to find out the winner of Tuesday’s Georgia runoff election between Democratic incumbent Senator Raphael Warnock and Republican challenger Herschel Walker—and rightly so. The fate of the Senate hangs in the balance, a fact observers have magnified.

“The outcome of (Georgia’s) runoff will have major consequences for the next two years, and possibly even longer,” wrote Jonathan Bernstein of Bloomberg.com.

If anything, the election is even more important than most Americans believe. Don’t take his word for it: Listen to Senate Majority Leader Chuck Schumer. The New York Democrat told MSNBC’s “Rachel Maddow Show” that having 51 seats instead of 50 is “not 1% different.” (51 would actually be a two percent increase over 50, but let’s ignore that.) “It’s very different,” Schumer said, as he explained what’s at stake in today’s Georgia runoff.

The Senate has been evenly divided for two years. That means every committee has the same number of Republicans and Democrats, forcing them into a power-sharing arrangement. It also means most controversial issues produce a deadlocked vote in every committee. If the Democrats have a one-seat majority, that all ends. Instead, the Democrats control every committee outright—and Chuck Schumer controls the whole body as undisputed majority leader. He can stack the committees to rubber-stamp his agenda with no Republican interference. “You can get different bills out of committee much more quickly,” Schumer told MSNBC.

Since Vice President Kamala Harris casts the tie-breaking vote, technically Democrats have an edge—but only in limited circumstances: All 50 Democrats have to hang together and Kamala has to be available to make the 51st vote. If one of the Democrats gets ill, or Harris gets sent out of the country, the Senate deadlocks. An extra vote lets Harris be more active in the White House—which is the last thing any Republican should want.

Having full control of the Senate “will mean appointees and judges will get appointed much more quickly,” said Schumer. “Any time a judge or nominee to the administration … gets a vote out of committee that’s 10-10, that’s tied, it delays things for a week.” Even as things are, Schumer bragged about his ability to left-wing extremists and open-borders lobbyists to courts overseeing street crime and immigration. “We’ve set the record, as of today, actually, 83 new judges, two-thirds women, half people of color, and progressive judges, not just partners in law firms and prosecutors, but legal aide attorneys and immigration lawyers,” Schumer bragged. But having Raphael Warnock as the 51st Democratic senator will let Joe Biden and Kamala Harris fast-track “a lot of good, progressive nominees” onto the nation’s courts.

Raphael Warnock would effectively strip the chamber’s only genuine moderate, Joe Manchin of West Virginia, of his power to slam the brakes on Schumer’s radical agenda. “When you have 50 senators … obviously, any one senator can say, ‘I’m not voting for it unless I get this, this, or this,’” Schumer said—like when Manchin refused to vote for any bill that funded abortion. “When it’s 51, it’s harder to do,” Schumer said with a smile.

If a radical like Warnock is the Senate’s deciding vote, his socialistic vision could undermine Manchin and others closer to the middle of his party. “Warnock may offer amendments, in committee or on the Senate floor, that other Democrats…would not have proposed,” wrote Bernstein.

You can say that again.

As The Horn reported last week, three socialist organizations—Bernie Sanders’ Our Revolution, the Democratic Socialists of America, and the Progressive Democrats of America—plan to turn the Democratic Party into an outright socialist party. And their candidates won than 90 percent of their races in the 2022 midterms. Shifting power from Joe Manchin to Raphael Warnock would fall in line with their extremist goals to move America far to the Left.

#5. THE CONGRESSIONAL DEMOCRATS CAN INVESTIGATE YOU

If Democrats have full control of the Senate, “we can have subpoena power. With 50-50, you can’t really get subpoena power,” Schumer said. “It means it’s a lot easier to get things done.” For instance, the Senate could set up its own January 6th hearings and investigate every one of the hundreds of thousands of Americans who attended the “Stop the Steal” rally on that date, instead of the handful of shadowy figures who broke into the U.S. Capitol.

#6. LOCKING IN DEMOCRATS’ POWER FOR LONGER

While Harris gives the Democrats the thinnest possible majority, Schumer knows that one-vote threshold could always disappear before the next election. “There’s the possibility that Democrats could lose a senator to resignation or death over the next two years,” wrote Bernstein.

If Democrats go from 50 seats to 49 seats due to a resignation, then Republicans take control of the Senate, giving them control of Congress outright. “Having a 51st senator is valuable insurance,” said Bernstein.

#7. IT MAKES IT EASIER TO LIE TO VOTERS AND RE-ELECT LIBERALS

Bernstein yanked the political curtain back to expose the backroom deals and maneuvering, as well. Having 51 seats will allow the Democrats to pull the wool over voters’ eyes by portraying themselves as “independent” of the White House. “Democrats in swing states may be able to cast some votes against Biden’s nominees without actually defeating them (as long as they coordinate their opposition), allowing them to demonstrate independence from the White House, which could be an asset in future election campaigns,” wrote Bernstein.

In other words, Democrats will vote-trade with RINO Republicans to make sure Biden gets his way—covering up their own extremism when they run for re-election in six years.

Those are seven good reasons every American is glued to Georgia’s election returns tonight.