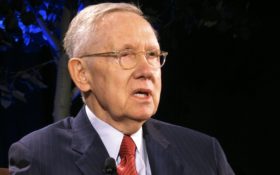 On Monday Former Senate Majority Leader Harry Reid, D-Nev., said in an interview with USA Today that he was switching sides in the most hotly contested debate inside Washington, D.C.

And he plunged a political knife right in the back of House Majority Speaker Nancy Pelosi, D-Calif.

Just weeks ago, Reid was united with Pelosi. Both are advising Democratic lawmakers not to fall into the impeachment trap. Poll after poll shows Americans are strongly against Democrat-led impeachment proceedings against Trump.

Pelosi has repeatedly cautioned fellow Democrats against falling into the unpopular political trap. She is reportedly concerned that voters will punish Democrats in the 2020 election for the political stunt.

“It’s not the right thing to do nothing,” Reid said.

“It’s not the right thing to jump into impeachment without doing an inquiry,” he said. Reid believes a House impeachment panel would “give the American people a view of what’s going on” — and start swaying public opinion against Trump.

It doesn’t matter that any impeachment proceedings would be doomed in the Republican-controlled Senate, Reid claims.

“That has been one of the big arguments against the impeachment,” Reid said. “Why make Trump a hero by saying ‘they couldn’t impeach me?’” However, that risk is “all the more reason why the inquiry is the right thing to do.”

The sudden change in heart by one of the country’s most senior Democrats reflects the growing momentum within Democratic rank and file to start legal efforts to oust Trump.

“That has been one of the big arguments against the impeachment,” Reid said. “Why make Trump a hero by saying ‘they couldn’t impeach me?’”

Reid said that is “all the more reason why the inquiry is the right thing to do.”

Should Harry Reid and the Democrats proceed with a doomed impeachment attempt?

Or should they drop it, and move on.

Should Democrats listen to Harry Reid?