What a blessing! Woman and cat escape after crashing into river - The Horn News 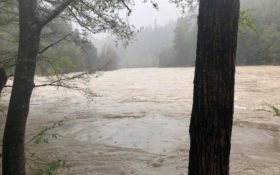 A woman was able to save herself and her cat after the car they were riding in plunged into a Massachusetts river.

Blackstone Fire Chief Michael Sweeney says the woman had just picked up her cat from the groomer Saturday when she crashed the car into the Blackstone River.

Sweeney says the woman grabbed the cat and climbed out the window before the car sank into the water. The cat was in a pet carrier.

The woman in her 60s was taken to the hospital to be treated for cuts on her hand. Both the woman and the cat were expected to be OK.

Sweeney tells WCVB-TV that the woman is a “spunky lady.” He says “to be able to do what she did and get out of that car, she was amazing.”