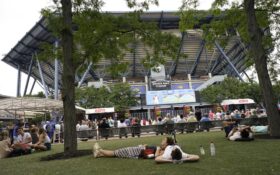 The Westminster Kennel Club dog show is moving next year to a new venue: the home of the U.S. Open tennis tournament. The kennel club announced Thursday that canine champs will take over the USTA Billie Jean King National Tennis Center on May 6, 8 and 9.

Westminster awarded its coveted best in show prize at Manhattan’s Madison Square Garden for decades before the coronavirus pandemic prompted the dog show to move outdoors. The event found a home at a suburban estate and shifted from winter to June for the past two years.

Organizers once hoped to return to the Garden as soon as this past January before a surge of virus cases scuttled those plans. A message was sent to the club Thursday about the move to the tennis center.

While best known for hosting one of the premier events on the tennis calendar, the sprawling venue in Queens also has been the site of wrestling and video gaming competitions in recent years.

“The sight of dogs roaming the grounds at the home of the U.S. Open is certain to put a smile on everyone’s faces,” chief operating officer Danny Zausner said in a release.

The dog show dates to 1877 and is considered the nation’s most prestigious canine competition. These days, dogs face off in agility, obedience and the traditional breed-by-breed judging that leads to the best in show award on the final night. Fox Sports televises and streams various parts of the event.

Next year, the top dog will be crowned in the center of Arthur Ashe Stadium, the kennel club said.

The U.S. Open takes place in August and September.