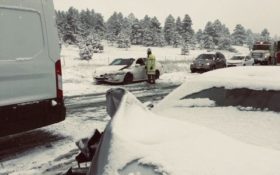 Northern Arizona had a rare dose of late-season snow.

Some parts of the region received only traces. But the National Weather Service recorded inches of snow in Williams, Flagstaff and Grand Canyon Village.

The weather service says measurable snowfall in Flagstaff in late May is unusual. It’s happened less than a dozen times since record keeping began in 1898.

The latest storm brought record-breaking daytime lows to the region. Roads had been slick until the snow tapered off Thursday afternoon.

The Arizona Department of Public Safety says several vehicles crashed on Interstate 40 west of Flagstaff, including a tour bus wedged between two semi-trailers. No major injuries were reported.

Flagstaff is above its average 102 inches (2.6 meters) of snowfall per season at more than 118 inches (3 meters).
The Associated Press contributed to this article
View older comments