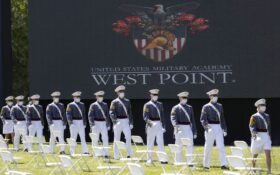 Most of the 73 West Point cadets accused in the biggest cheating scandal in decades at the U.S. Military Academy are being required to repeat a year, and eight were expelled, academy officials said Friday.

The cadets were accused of cheating on an online freshman calculus exam in May while students were studying remotely because of the coronavirus pandemic. An investigation was launched after instructors noticed irregularities in answers. All but one were freshmen, or plebes, in a class of 1,200. The other was a sophomore.

Cadets at the centuries-old officer training academy on the Hudson River are bound by an honor code that they “will not lie, cheat, steal, or tolerate those who do.” The cheating scandal is the biggest at West Point since 1976 and preceded the tightening of an academy policy that spared many cadets in this case from being kicked out.

West Point said that of the 73 cases investigated by the cadet honor committee, six cadets resigned during the investigation, four were acquitted by a board of their peers, and two cases were dropped due to insufficient evidence.

Most of the cadets, 51, were “turned back” one full year after admitting to cheating, and two were turned back six months. Those cadets are under probation until graduation.

“The tenets of honorable living remain immutable, and the outcomes of our leader development system remain the same, to graduate Army officers that live honorably, lead honorably, and demonstrate excellence,” Williams said in a prepared release. “West Point must be the gold standard for developing Army officers. We demand nothing less than impeccable character from our graduates.”

Eight cadets were removed from the academy. Of those, three accepted the chance to take part in an “academy mentorship program” that allows them to reapply to the academy after serving for up to a year as an enlisted soldier.

The academy also said it will end its 6-year-old “willful admission process,” which was used by 55 cadets and is designed to protect cadets who promptly admit to wrongdoing from being kicked out. Officials determined the process was not meeting its goal of increasing self-reporting and decreasing toleration for violations of the honor code.

West Point said that 52 of the cadets were athletes, but that none of the guilty cadets are currently representing the academy on teams.

The 1976 scandal involved 153 upperclassmen who resigned or were expelled for cheating on an electrical engineering exam. The secretary of the Army appointed a select commission headed by former astronaut Frank Borman to review the case, and more than 90 of those caught cheating were reinstated and allowed to graduate.