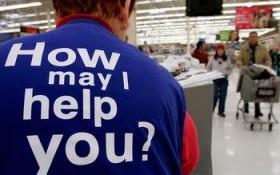 Those smiley door greeters are back at Wal-Mart.

The nation’s largest retailer says in a blog post this week that it’s bringing back door greeters to a majority of its more than 5,000 stores by mid-summer to improve customer service. For the remainder of the stores, which have had problems with theft, Wal-Mart will position a “customer host,” who will not only greet customers but also check receipts to prevent shoplifting.

The rollout follows a successful pilot.

Four years ago, the discounter decided to remove the workers at the front of the store and relocated them to other areas.

Greeters were a tradition that its late founder Sam Walton started.

The move comes as the Bentonville, Arkansas-based retailer is working at improving sales and service amid fierce competition.