CIA using a weird TV trick to spy into YOUR living room!? - The Horn News 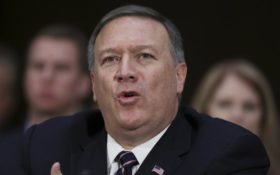 But there is one document that should serve as a horrifying wake-up call for all Americans — and it means the CIA could be spying on you in your own home, through your television.

The more than 8,000 documents cover a host of technical topics, including what appears to be a discussion about how to compromise smart televisions and turn them into improvised surveillance devices.

According the Wikileaks, “Weeping Angel places the TV in ‘Fake-Off’ mode, so that the owner falsely believes the TV is off when it is on. In ‘Fake-Off’ mode the TV operates as a bug, recording conversations in the room and sending them over the Internet to a covert CIA server.”

The documents which Wikileaks calls “Vault 7,” are dated from 2013 to 2016, and reflect the administration of former President Barack Obama.

WikiLeaks said the data also include details on the agency’s efforts to subvert American software products and smartphones, including Apple’s iPhone, Google’s Android and Microsoft Windows.

The CIA tools, if authentic, could undermine the confidence that consumers have in the safety and security of their computers, mobile devices and even smart TVs.

WikiLeaks said the material came from “an isolated, high-security network situated inside the CIA’s Center for Cyber Intelligence in Langley, Virginia.” It didn’t say how the files were removed, such as possibly by a rogue employee, by hacking a federal contractor working for the CIA or breaking into a staging server where such hacking tools might be temporarily stored.

Experts who’ve started to sift through the material said that it appeared legitimate and that the release was almost certain to shake the CIA.

Jonathan Liu, a spokesman for the CIA, said: “We do not comment on the authenticity or content of purported intelligence documents.”

WikiLeaks said the archive “appears to have been circulated among former U.S. government hackers and contractors in an unauthorized manner, one of whom has provided WikiLeaks with portions of the archive.”

If the authenticity of the documents is officially confirmed, it would represent yet another catastrophic breach for the U.S. intelligence community at the hands of WikiLeaks and its allies, which have repeatedly humbled Washington with the mass release of classified material, including hundreds of thousands of documents from the State Department and the Pentagon.

WikiLeaks, which has been dropping cryptic hints about the release for a month, said in a lengthy statement that the CIA had “recently” lost control of a massive arsenal of CIA hacking tools as well as associated documentation.

“There’s no question that there’s a fire drill going on right now,” said Jake Williams, a security expert with Augusta, Georgia-based Rendition Infosec. “It wouldn’t surprise me that there are people changing careers — and ending careers — as we speak.”

One of the purported CIA malware programs is described in the WikiLeaks documents as a “simple DLL hijacking attempt” that had been tested against Microsoft Windows XP, Vista and 7 operating systems. The technique, which the document called a “Windows FAX DLL injection,” introduces computer code that allows an attacker to gain access to a computer process’ memory and permissions while at the same time masking the attack.

Williams, who has experience dealing with government hackers, said the voluminous files’ extensive references to operation security meant they were almost certainly government-backed. “I can’t fathom anyone fabricated that amount of operational security concern,” he said. “It rings true to me.”

WikiLeaks said its data also included a “substantial library” of digital espionage techniques borrowed from other countries, including Russia.

“The damage right now is relatively high level,” he said. “The potential for really detailed damage will come in the following releases.”