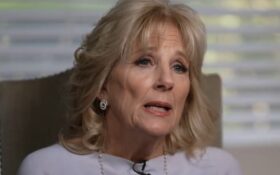 In May, First Lady Jill Biden told Harper’s Bazaar about “fexting,” her habit of using text message to argue with President Joe Biden.

Yet, she went viral on Wednesday for an apparent exchange of some harsh words with the president, according to four photos tweeted by a P.R. professional working for the GOP.

“Did Jill scold him?” one Twitter user asked in response to the photos.

“She said he can’t have any more ice cream,” another user joked.

The president was holding a newspaper in the photos. One user joked, “Is that the Australian paper I wonder? The one with the headline about Hunter?”

Other viewers expressed pity for the Biden family and their public drama. “This is so sad,” one user said. “Oh no. Gramps is in trouble,” said another.

A story in four parts: pic.twitter.com/Xdd1OfJQCT

The White House has been unveiling Presidential Medals of Freedom since Sunday, and the president appeared to put one medal on backward.

President Biden called himself a “gaffe machine” while on a book tour in 2018. Since then, he’s amassing a record of not only verbal gaffes but also physical gaffes.

These Presidential Medal of Freedom recipients embody the soul of this nation – hard work, perseverance, and faith. They’ve dedicated their lives to advocating for the vulnerable and driving change.

I’m proud to welcome them and their families to the People’s House tomorrow. pic.twitter.com/CGm8443ZmW

President Biden on Tuesday bestowed the nation’s highest military honor to four Army soldiers for heroism during the Vietnam War, bravery that he said had not diminished even with the passage of time.