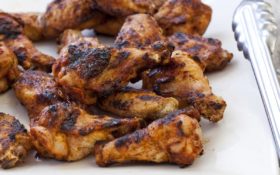 To identify the burglary suspect who broke into a closed Florida police substation and ate an officer’s chicken dinner, detectives didn’t need to lift fingerprints or get DNA from the discarded meal.

The ID cards authorities say the suspect left behind did the trick.

Boynton Beach police said Wednesday that officers arriving for a morning shift at a department substation last week found a broken window and the remains of a hastily eaten chicken dinner scattered in the kitchen.

Finding a suspect wasn’t hard. They say 29-year-old Yvelande Jean-Pierre left behind her wallet, which contained her two identification cards.

Police say security video shows she spent about 45 minutes in the substation before leaving.

Jean-Pierre is charged with burglary. Court records do not show if she has an attorney.