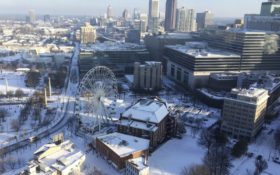 A thin layer of snow and ice across the South closed highways, schools and government offices and sent cars sliding off the road Wednesday, while a blast of cold air broke records as far south as the Gulf Coast.

Icicles hung from a statue of jazz musicians in normally balmy New Orleans, and drivers unaccustomed to ice spun their wheels across Atlanta, which was brought to a near-standstill. The beach in Biloxi, Mississippi, got a thin coating of snow.

The snowfall sabotaged the morning rush hour before it even began, sending cars crashing into each other in a swath of the U.S. with precious few snowplows. Officials urged people to stay off the roads if possible and to bundle up if they ventured outside.

By midday, skies were bright and sunny, but temperatures were expected to remain below freezing throughout the day in much of the region, and roads were likely to remain icy into Thursday in some places.

“People keep asking when we will get the all-clear,” said Georgia Transportation Department spokeswoman Natalie Dale. “It will not happen today.”

Thousands of schoolchildren and teachers got the day off. Many cities canceled meetings and court sessions, and some businesses closed.

With the temperature hovering around 10 degrees, grocery store clerk Susan Brown got to work an hour late in Decatur, Alabama. Snow and ice blanketed grassy areas and neighborhood roads.

“Traffic is moving along, but on side roads and residential streets it’s pretty slick,” she said. “As long as you stay in the tracks, you’re pretty good.”

Dairy farmer Will Gilmer bundled up for the drive to his milking barn before daybreak in western Alabama, the thermometer reading 7 degrees (-14 Celsius).

“I probably had four layers on and then insulated coveralls and a heavy coat on over that. I made it OK except for my toes,” he said.

Icy roads hampered travel as far south as the Gulf Coast, where ice pellets covered the tops of sago palm trees. Stretches of Interstate 10 were closed in Louisiana and across Alabama’s Mobile Bay.

Downtown Atlanta was eerily quiet. Some motorists drove through red lights rather than stop and risk sliding.

“This is kind of my scene,” said Sarah Snider, a zookeeper at the Atlanta Zoo who recently moved from Vermont and was amused that everything shut down over just an inch or two of snow. “It is shocking that this much snow shut down the whole city.”

Dozens of accidents were reported in metro Atlanta, including one involving a salt truck and another involving a commuter bus.

“Y’all aren’t going to make it!” a driver in a pickup truck yelled at two drivers in compact cars that were spinning their wheels on an icy boulevard near SunTrust Park, where the Atlanta Braves play. “You’re going to slide back down the hill! Turn around!”

Outside Five Points Station, the center of Atlanta’s commuter rail system, a man fell on the sidewalk and appeared unresponsive. An ambulance came quickly.

“The up-north way of dealing with snow needs to come down here,” Burton said. Atlanta needed “snowplows, salt already going down last night so people can get around.”

But Susan Luciano, walking in her snow-blanketed Peachtree City, Georgia, neighborhood, was delighted: “It is the most romantic setting. It is beautiful. This is God’s masterpiece. It’s refreshing, it’s rejuvenating, it’s like a postcard. It’s like our neighborhood is a living postcard.”

The blast of cold air shattered records early Wednesday in Louisiana and Mississippi, and electricity usage surged to record highs as people tried to keep warm in Texas. It was 21 degrees (-6 Celsius) before dawn in New Orleans, breaking the city’s record low of 23 degrees (-5 Celsius) on the same date in 1977.

In Mississippi, the temperature in Hattiesburg dipped to 13 degrees (-11 Celsius), breaking the record of 14 (-10 Celsius).

Snow fell in a wide band that stretched from southeastern Texas all the way to western Massachusetts. As much as 4 inches fell in parts of North Carolina, where the Highway Patrol had responded to more than 500 collisions by midday.