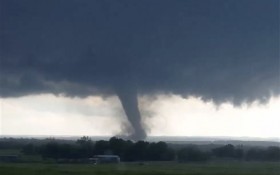 Forecasters are warning of severe storms as a powerful weather system moves across the central United States.

The bull’s-eye for some of the most fearsome weather — including possible tornadoes — is over parts of Louisiana, Arkansas and east Texas.

Meteorologists at the national Storm Prediction Center say nearly 19 million people living from Michigan to south Texas are at some risk of severe storms Friday.

The area around Shreveport, Louisiana; and the city of Texarkana on the Texas-Arkansas line faces an enhanced risk of severe weather. That zone is home to nearly 1.4 million people, and forecasters are warning them to expect storms and possible tornadoes later Friday.