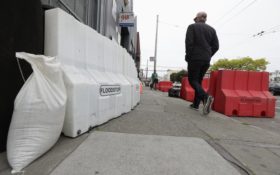 Northern California is bracing for a major spring storm that is expected to dump several inches of rain on burn-scarred areas of wine country and could present the first test of the partially repaired spillway at the nation’s tallest dam.

In Sonoma County, which was devastated by wildfires in October, the weather service predicted 4 to 6 inches (10-15 centimeters) of rainfall through Sunday. Even if the rain doesn’t pan out, “it’s better to be prepared than not,” said county Supervisor David Rabbitt.

For officials in Santa Rosa, which was also hit hard by last year’s fires, it’s not the amount of total rainfall that worries them, it’s the rate at which the rain falls. Workers have been monitoring hundreds of storm drain inlets, especially the ones protecting the neighborhoods destroyed by the fires, said fire department spokesman Paul Lowenthal.

“When we start talking about half an inch of rain or more an hour, that’s where we’re more susceptible to mudslides and debris flow in and around our burn zones,” Lowenthal said.

Friday’s storm may be the first real test of the city’s flood protection system as previous storms forecast to be strong have fizzled out or shifted elsewhere, he said.

Some areas of the Santa Cruz mountains could see up to 8 inches (20 centimeters) over a three-day period, prompting forecasters to warn of possible flooding, mud and rock slides.

Yosemite National Park officials canceled camping reservations for this weekend because the warm Pacific storm is expected to have a significant effect on the park and surrounding areas starting Friday. Roadways, campgrounds and other facilities could be affected.

The National Weather Service issued a flood watch for the Yosemite area from 11 p.m. Friday through 11 a.m. Sunday.

To the north, California Department of Water Resources officials warned this week that they may have to use the partially rebuilt spillway at Oroville Dam for the first time since repairs began on the badly damaged structure last summer.

Lake Oroville has been slowly filling up all winter but as of Thursday morning, more water was being released through smaller outlets than was flowing in. The water level was at 793 feet (242 meters) and dropping. Water managers say they’ll open the gates to the main, partially repaired spillway if the lake level reaches about 830 feet (253 meters).

In February 2017, a massive crater opened up in the main spillway, a 3,000-foot (914-meter) concrete chute that releases water from Lake Oroville, which is California’s second-largest reservoir. Crews shut down the spillway for inspections just as a major storm dumped a torrent of rain in the Feather River basin. With water releases stopped, the lake quickly filled to capacity and water began flowing over a concrete weir that serves as an emergency spillway. It had never been used.

The water eroded the barren hillside beneath the concrete, leading to fears the weir would collapse and release a 40-foot (12-meter) wall of water that would swamp communities and destroy levies for miles downstream. Authorities ordered nearly 200,000 people downstream to flee.

California officials say they hope to avoid using the main spillway but are confident it can safely function if needed.

“It’s a big storm, it’s a warm storm,” said Erin Mellon, a spokeswoman for the Department of Water Resources. “Obviously we have plenty of flood capacity within the lake considering it’s still 110 feet (34 meters) below the top of the reservoir.”

Construction crews last year fully rebuilt about a third of the spillway with rebar-reinforced structural concrete that’s anchored into bedrock. The other two thirds were left with temporary concrete until construction resumes.