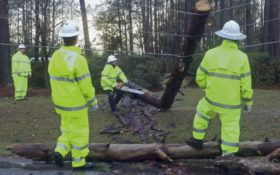 A vast storm system turned deadly throughout the Southeast U.S. this weekend, kicking up tornadoes, shredding homes and leaving a path of destruction scattered around the country.

The massive storm has claimed at least 18 lives on its two-day assault on the region.

Authorities said at least 14 deaths occurred in south Georgia alone, seven from an apparent winter twister that tore through a trailer park before dawn Sunday. Authorities reported four deaths Saturday in Mississippi as the storm system ramped up. It was so big parts of it threatened the Carolinas and north Florida. 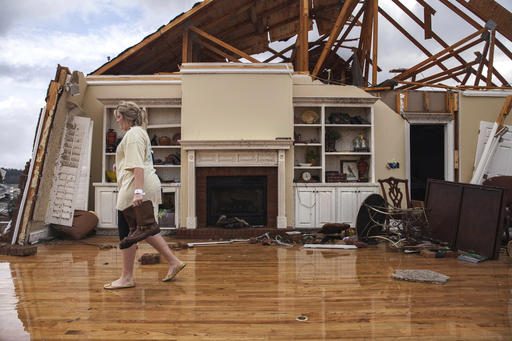 Jenny Bullard carries a pair of boots from her home that was damaged by a tornado, Sunday, Jan. 22, 2017, in Adel, Ga. Georgia Gov. Nathan Deal declared a state of emergency in several counties, including Cook, that have suffered deaths, injuries and severe damage from weekend storms. (AP Photo/Branden Camp)

In southwest Georgia, Bridget Simmon along with her parents, her daughter and her grandson were in their brick home in the city of Albany when the sky got dark Sunday afternoon and the wind began to howl.

“I was in the den and I heard that loud roar and I grabbed the baby and I said, ‘Let’s go guys. This is it.’ We laid down and that was it.” The wind was so loud, she added, “you could hear it beating back and forth.”

Minutes later, their home was largely unscathed, save for a carport that collapsed atop two cars. But trees were down all around, police sirens wailed and authorities would add three more deaths for an overall count of at least 18.

Some 60 miles away from Simmons’ home, Coroner Tim Purvis in south Georgia’s Cook County confirmed seven people died at the mobile home park in the rural community of Adel, where about half of the 40 homes were leveled. Debris lay about not far from mobile homes largely untouched but emptied of survivors and cordoned off by police.

Elsewhere, shredded siding from mobile homes, a house stripped of exterior walls but left standing, even a piano blown outdoors, all bore evidence of the power of the powerful storms system that tore across the Deep South. 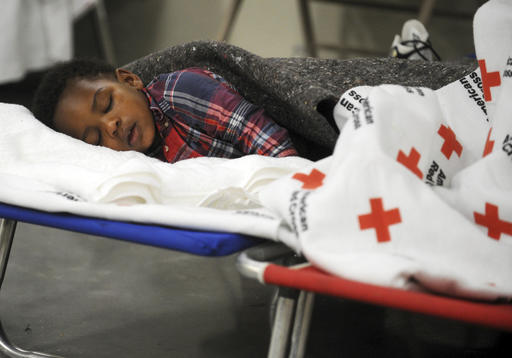 Prince Kirkland, 1, of Hattiesburg takes a nap at the Forrest County Storm Shelter, in Hattiesburg, Miss., Sunday, Jan. 22, 2017. Kirkland and his family were displaced after a deadly tornado swept through the Hub City in the early hours of Saturday morning. (Ryan Moore/WDAM-TV, via AP)

In South Carolina, the National Weather Service has confirmed that two tornadoes struck over the weekend, injuring one woman who was trapped in a mobile home that was damaged near Blackville. The weather service says a tornado touched down about 3:45 p.m. Saturday in Barnwell County and moved into Bamberg County. The other occurred in Orangeburg County a few minutes later.

Weather experts say tornadoes can hit any time of year in the South — including in the dead of winter. Even north Florida was under the weekend weather threat.

While the central U.S. has a fairly defined tornado season — the spring — the risk of tornadoes “never really goes to zero” for most of the year in the Southeast, explained Patrick Marsh of the Storm Prediction Center in Norman, Oklahoma.

He said 39 possible tornadoes were reported across the Southeast from early Saturday into Sunday evening — none immediately confirmed. Of that, 30 were reported in Georgia, four in Mississippi, and one each in Louisiana and South Carolina. 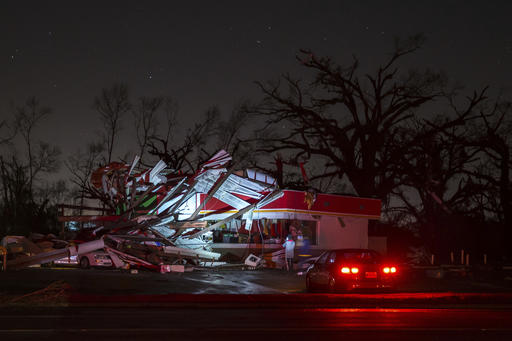 People stop to take a photo of a gas station damaged by an apparent tornado, Sunday, Jan. 22, 2017, in Albany, Ga. Nathan Deal declared a state of emergency in several counties, including Cook, that have suffered deaths, injuries and severe damage from weekend storms. (AP Photo/Branden Camp)

January tornado outbreaks are rare but not unprecedented, particularly in the South. Data from the Storm Prediction Center shows that, over the past decade, the nation has seen an average of 38 tornadoes in January, ranging from a high of 84 in 2008 to just four in 2014.

Nineteen-year-old Jenny Bullard said she and her parents, Jeff and Carla, are glad to have escaped without major injury after an apparent tornado battered their home in Cook County. They are a farming family dating back generations, living not far from where the mobile homes were destroyed.

The middle section of their brick house was blown off the slab, leaving nothing but the kitchen island standing. On one side, the parents’ bedroom remained intact. Jenny’s bedroom on the other side was smashed in — and a piano was blown out of the house.

She recalled awaking to the sound of hail before dawn.

“The hall wall came in on me and I fell down. And our backdoor came through and fell in on me. And I heard my dad calling my name …There was a bunch of stuff on top of him and I just started throwing everything I could until I got to him,” she said.

Together, she and her father met up with their mother and got free. 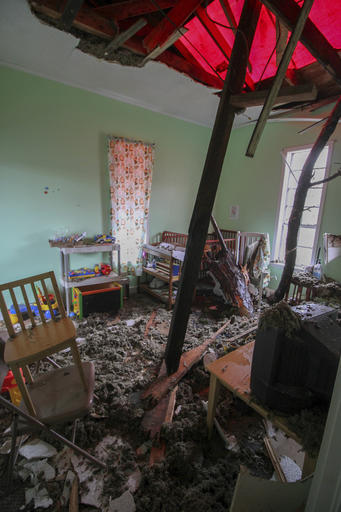 A tree branch went through the roof into the nursery at Lockhart Church of God in Lauderdale, Miss., when a tornado went through the area late Saturday, Jan. 21, 2017. (Paula Merritt/The Meridian Star via AP)

The young woman wore a sling on one arm hours afterward Sunday as she went back through the debris for belongings. Bricks lay scattered about, alongside their possessions and furniture.

“The first thing I wanted to do was get all the pictures,” she said. Across the street, where the Bullards kept farm equipment in sheds, one shed was blown in amid twisted metal. Two grain silos were blown over.

“It’s a horrible tragedy. But all this stuff can be replaced,” she said. “We can’t replace each other. We’re extremely lucky. My dad is lucky to be alive.”