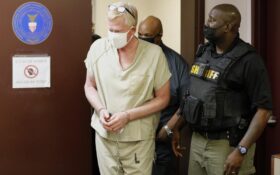 More than 13 months after disgraced South Carolina attorney Alex Murdaugh called 911 after finding his wife and son shot outside their home, a grand jury indicted him Thursday on murder charges in their killings.

But the legal documents shed little light on the ongoing mystery over the deaths that captivated the public, who have clicked on hundreds of stories and podcasts detailing the dozens of other criminal charges that have piled up in the months since Murdaugh’s wife Maggie, 52, and their 22-year-old son, Paul, were killed on June 7, 2021.

Murdaugh, 54, has repeatedly denied any role in the deaths, saying he was visiting his mother and ailing father and discovered his son and wife slain when he returned to their estate.

“Alex wants his family, friends and everyone to know that he did not have anything to do with the murders of Maggie and Paul. He loved them more than anything in the world,” Murdaugh defense attorneys Jim Griffin and Dick Harpootlian said in a statement.

Each murder indictment was one paragraph with exactly one new detail, accusing Murdaugh of killing his wife with a rifle and his son with a shotgun. They include no details on how police linked Murdaugh to the deaths after 13 months of investigation or why a man who had no criminal history and was part of a wealthy, well-connected family that dominated the legal community in tiny Hampton County might have wanted to kill his own family members.

More information may be released in a bond hearing for the new charges, which has not been scheduled. Murdaugh is already in jail unable to pay a $7 million bond on the dozens of other charges.

Murdaugh also was charged Thursday with two counts of possession of a weapon during a violent crime, according to the indictments from a grand jury in Colleton County, site of the Murdaugh hunting estate where the killings happened.

Murdaugh’s famous family has dominated the legal scene in neighboring Hampton County for nearly a century. Murdaugh’s father, grandfather, and great-grandfather were the area’s elected prosecutors for 87 years straight. Murdaugh once worked for the century-old, family-founded law firm, which said in September that he was stealing money.

Throughout the investigation, state police have released few details about the case, even fighting a lawsuit in which The Post and Courier newspaper accused the agency of refusing to release information required by state law. Thursday’s indictments were no exception. A joint statement from State Law Enforcement Division Chief Mark Keel and state Attorney General Alan Wilson said they wouldn’t comment on specific evidence because the investigation remains active and a court case is pending.

“Over the last 13 months, SLED agents and our partners have worked day in and day out to build a case against the person responsible for the murders of Maggie and Paul and to exclude those who were not. At no point did agents lose focus on this investigation,” Keel said in the statement.

Murdaugh’s lawyers said “it was very clear from day one” that law enforcement was focusing on Murdaugh and no one else. They said they want his trial held in the next three months.

“We know that Alex did not have any motive whatsoever to murder them,” the defense attorneys said.

If convicted of murder, Murdaugh would face 30 years to life in prison without parole. Prosecutors could also choose to seek the death penalty under state law because more than one person was killed.

The June 2021 deaths prompted authorities to look into all corners of Murdaugh’s life. At least a half-dozen investigations resulted in charges that he stole $8.5 million from people who hired him and that he lied to police by saying he was shot by a stranger on a roadside when, officials say, he actually asked a friend to kill him so his surviving son could collect a $10 million life insurance policy just days after the family firm determined he was stealing money. The friend said the gun went off as he tried to wrestle it from a suicidal Murdaugh’s grip.

State police said that information they gathered in the Murdaugh investigations also led them to review what was initially reported as the hit-and-run death of 19-year-old Stephen Smith in Hampton County in July 2015, although they didn’t provide more details.

Agents also said they plan to exhume the body of the Murdaugh’s housekeeper, Gloria Satterfield, who the family said died in the hospital several days after a fall in 2018. Prosecutors said Murdaugh got his home insurers to pay more than $4 million in wrongful-death claims in Satterfield’s case by saying he was negotiating for her family but didn’t give them any of the money.

In June, Murdaugh was indicted in what prosecutors said was an eight-year money laundering and painkiller ring that also involved that same friend and former client charged with trying to help him commit suicide.

Murdaugh wrote 437 checks worth $2.4 million that his friend cashed over eight years, keeping some of the money for himself and giving the rest for wide-ranging illegal activities, according to the indictments unsealed last month.