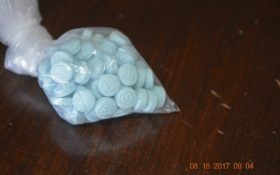 As the U.S. deals with its deadliest overdose crisis to date, a national crime-prevention group is calling on the Justice Department to clamp down on social media’s role in the spread of fentanyl, the drug largely driving a troubling spike in overdose deaths among teenagers.

The National Crime Prevention Council sent a letter Wednesday to Attorney General Merrick Garland, calling for an investigation. The group known for ads featuring McGruff the Crime Dog is especially concerned about the sale of fake pills laced with fentanyl on Snapchat, a popular platform among teens.

Overdose deaths in the U.S. hit a record last year, with an average of one death every five minutes in the U.S. Among teens ages 10 to 19, deaths spiked 109% between 2019 and 2021, according to monthly median data from the Centers for Disease Control and Prevention. The vast majority of those deaths, 84%, involved fentanyl, according to the report released last week.

Dealers use many social media and money exchange platforms, sometimes in the same transactions, but Snapchat’s encrypted technology and disappearing messages make it especially hard to catch dealers, DelPonte said.

The Justice Department had no comment on the letter.

Snapchat’s parent company, for its part, said it has taken significant steps to improve safety on the platform and saw a drop in user reports about drug sales from over 23% last year to 3.3% last month. It’s also backing a new bill to bolster drug-activity reporting by social media companies.

Jennifer Stout, vice president of global public policy at Snap, said the company uses technology to identify and remove dealers and support police investigations. “We will continue to do everything we can to tackle this national crisis,” she said in a statement.

Still, Snapchat is the most common platform grieving families mention when they reach out to his group for help, DelPonte said.

Those parents included Amy Neville, whose son Alex was 14 when he bought a pill that he thought was Oxycontin through the platform in June 2020. The boy had just told his parents about his experimentation with drugs and they were about to put him in treatment.

One day, he got his hair cut, went to lunch with his dad and hung out with friends. After he returned to the family’s home in Orange County, California, he went to his room and at some point took the pill that ended his life.

“The following morning I found him in his bed. The rest is craziness,” Amy Neville said. “After he passed away, we said, ‘How did this happen?’ We thought we were prepared.’”

His family knew little about fentanyl, which federal authorities say can be lethal in amounts smaller than the tip of a pencil. Neville has gotten a tragic education in the years since her son died and has also heard from more families whose children died of overdoses after buying pills through Snapchat, often for less than $25.

Neville, who calls Snap’s recent changes “a little Band-Aid on a gaping wound,” is also part of a lawsuit in California against the company. The lawsuit names several teens and young adults around the country who have died after accidental overdoses. It was filed by the Social Media Victims Law Center, which is now representing 28 families whose children have bought counterfeit pills through Snapchat. Founding attorney Matthew Bergman said the platform is the only one where their clients’ children have gotten fake or lethal pills.

The Drug Enforcement Administration has called fentanyl “the deadliest drug threat facing this country,” and administrator Anne Milgram has said social media apps are the “perfect drug delivery tool” in a speech where she also named platforms like Facebook, Instagram, TikTok and YouTube.

Ed Ternan became an activist after his son died at age 22 from taking a single fentanyl-laced pill he thought was Percocet. He said he’s seen more action from Snapchat than other platforms since they became aware of the problem in early 2021. But he’d rather see the government work with companies to prosecute dealers than launch a corporate investigation.

“If the carrot is working, at some point the stick is counterproductive,” said Ternan, who serves on Snap’s safety board. “I want to prevent future deaths. And we do that with education awareness and joining forces with the social media companies.”

While the latest overdose death data has some encouraging signs, the number of fentanyl-laced pills seized in the U.S. more doubled this year, the DEA said this week. The drug is largely being produced in illicit labs in Mexico, with precursor chemicals bought from China, authorities have said.

For drug dealers, social media today holds a similar place to phones and beepers in years past, said Jim Carroll, a former director of Office of National Drug Control Policy who also serves as an unpaid member of the safety board advising Snap. There’s no data on exactly how much fentanyl is trafficked through social-media sites, he said, but Snapchat’s immense popularity among younger people could also help explain why dealers use the site and there are more deaths connected with the platform, he said.

“You can’t go after the phone company just because it’s the method of communication,” he said. Still, “All these social media companies need to do more.”