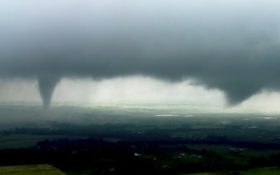 A powerful storm system spawned a confirmed tornado Tuesday morning near Tulsa International Airport, after shutting down an interstate highway and prompting water rescues elsewhere in the state.

More tornadoes, along with hail and damaging winds were predicted as the storms moved to the east. In Tulsa, forecasters confirmed a tornado near the airport at about 6:30 a.m. Oklahoma Office of Emergency Management spokeswoman Keli Cain said the area was being assessed following the Tuesday morning twister and that so far one home has been found damaged by a falling tree.

Airport spokesman Andrew Pierini said there was no damage at the airport, approximately 4 miles (6 kilometers) from where the tornado touched down, but passengers were moved into shelters for about 30 minutes. Many flights were canceled or delayed at the Tulsa airport because of the storms.

Along with severe weather, the storms brought a deluge of rain, causing the Oklahoma Department of Transportation to shut down Interstate 40 in El Reno, about 25 miles (40 kilometers) west of Oklahoma City, because of high water Tuesday morning. The National Weather Service says up to 5 inches of rain had fallen since Monday.

In Stillwater, home to Oklahoma State University, emergency responders were rescuing people from their homes because of high water.

The Storm Prediction Center had warned of an unusually high risk for severe weather Monday for parts of Oklahoma and Texas. Damage was reported in many areas Monday night, including the town of Mangum, but no deaths have been reported.

You can watch the tornado slowly form here: