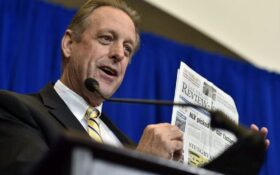 North Las Vegas Mayor John Lee has announced that he is switching his political affiliation from Democrat to Republican, citing a shift toward socialism.

The mayor of Nevada’s third-largest city made the announcement Tuesday on “Fox and Friends.” His campaign website now reflects the switch, KVVU-TV reported.

He also took to Twitter to make the decision public:

“Today, I switched political parties,” he wrote. “The Democratic Party is broken. It’s time to bring people together to get things done. It’s time to stop shouting and start solving problems.”

Today, I switched political parties. The Democratic Party is broken. It’s time to bring people together to get things done. It’s time to stop shouting and start solving problems. pic.twitter.com/PUDf5frc5D

The Las Vegas Review-Journal reported that Lee was referring to recent elections for the leadership of the Nevada State Democratic Party, in which a slate of candidates affiliated with the Democratic Socialists of America were elected to most of the party’s top leadership spots.

Lee has been mentioned as a possible candidate for governor of Nevada in 2022, the Review-Journal reported. He told the newspaper last week that he had been “approached by different people in both parties” to consider switching to the Republican Party and running as a moderate.

Lee didn’t indicate in the “Fox and Friends” interview whether he intended to run for governor.

Lee, who served in the Nevada Assembly and state Senate, was defeated by a Democrat, Patricia Spearman, in 2012. He won election as mayor the following year.

You can watch the segment with “Fox and Friends” segment below: