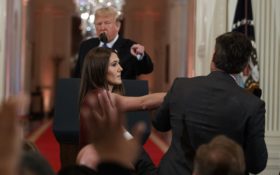 President Donald Trump paused his post-midterm elections press conference on Wednesday to drop the hammer on CNN White House correspondent Jim Acosta for his “rude” behavior — and ordered him to sit down during a heated exchange at the White House.

At the press conference, Acosta repeatedly asked the president about his tough stance against a U.S.-bound migrant caravan, and refused to give up the microphone to the next reporter.

Watch a clip of the heated argument here —

The spat began after Acosta kept questioning the president about his midterm campaign ad that showed illegal immigrants scaling fences and barriers to cross an international border on their way to America.

The president shot back at the CNN star, saying, “They weren’t actors. It was true. Do you think they were actors? They didn’t come from Hollywood.”

Acosta insisted the migrant caravan was “not an invasion.”

Trump responded, “Honestly, I think you should let me run the country, you run CNN. And if you did it well your ratings would be much better.”

Acosta then refused to give up the microphone and wrestled with an intern that came to take his microphone.;

The president ordered the CNN star to “sit down.”

Acosta reluctantly gave up the microphone to NBC reporter Peter Alexander, who then offered a defense to his colleague. “In Jim’s defense, I’ve traveled with him and watched him. He’s a diligent reporter who busts his butt like the rest of us.”

Trump shot back at the NBC reporter, “I’m not a big fan of yours either, to be honest with you.”

Later in the day, the White House revoked Acosta’s press pass after video of him shoving a White House intern emerged online. Predictably, the mainstream media accused the White House of attacking the free press. But where were these complaints in 2015?

Three years ago, former President Barack Obama also engaged in a heated exchange with someone that interrupted him during a White House event — an illegal immigrant and transexual who was shouting about the treatment of illegal immigrants and LBGTQ persons under the Obama administration.

Obama, just like Trump, ordered the person kicked out of the White House — and as the heckler was being forcibly removed, the assembled media cheered for Obama.

If the media can be proud of Obama for removing a heckler, why do they rush to attack Trump for the same behavior?

It’s no wonder, then, why Trump feels the need to defend himself from the unfair media.