Jim Jordan gets into yelling match in Congress... [explosive video] - The Horn News 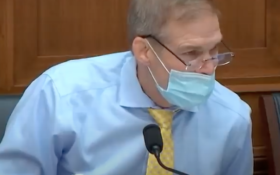 While the trial of ex-police officer Derek Chauvin had been unfolding, on Capitol Hill Congress was deadlocked in a debate about the future of policing in America.

Tuesday, the House Judiciary Committee saw one of the most heated shouting matches in recent memory.

Rep. Jordan, arguing for the legitimacy of the bill, said:

In other words, the defunding of police only seems to be leading to more crime — and for law-abiding citizens who live in these communities, the measure to prevent defunding the police could save lives.

“I would bet, the people, the residents of those communities think this amendment is relevant,” Jordan finished.

That’s when tempers boiled over.

Rep. Val Demings, D-Fla., was given the floor to speak.

“I served as a law enforcement officer for 27 years,” she said. “It is a tough job, and good police officers deserve your support. You know, it’s interesting to see my colleagues on the other side of the aisle support the police when it is politically convenient to do so.”

“Law enforcement officers deserve better than to be utilized as pawns, and you and your colleagues should be ashamed of yourselves,” she shouted and began slapping the table.

Chairman Rep. Jerry Nadler, D-N.Y., had to quickly intervene and calm the tensions.

You can watch the explosive video below: