[Watch] Jen Psaki yells at African reporter over this... - The Horn News 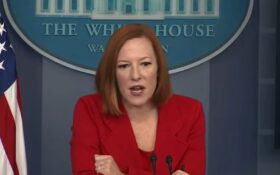 President Joe Biden has banned travel from several countries in southern Africa, but don’t expect the White House to entertain any your questions about it.

At a press conference following the ban, White House Press Secretary Jen Psaki offered a lackluster defense of the new policy, and then she bashed Today News Africa White House Correspondent Simon Ateba for pushing back.

Ateba told Psaki on Thursday, “You said something that is false. That’s all I’m saying.”

Psaki responded by forcing a smile and telling the African journalist, “It’s not effective to scream over your colleagues in here.”

Ateba first objected to Psaki after her unsatisfactory answer about Biden’s bans.

Another reporter, Yamiche Alcindor of PBS NewsHour, had asked Psaki, “Because the Omicron variant is in several states — I’m just wondering if you could talk a little bit about why the travel ban still makes sense. And I know that you talked about the timeline still being iffy, but could you just maybe explain a little bit more why those travel bans make sense right now?”

Psaki deflected the White House’s responsibility for the controversial bans.

“It’s not a decision made out of the White House. It is ultimately based on the recommendation — always — of our public health and medical experts,” she said. “They have advised — several days ago — the President to put in place restrictions on a set of countries where we are seeing the variant, specifically in South Africa, spread to hundreds if not thousands of cases and neighboring countries because of the concern about spread.”

Then, Psaki finally answered the question. She said that the White House will re-evaluate the travel bans every day.

At the press conference Wednesday, Ateba said that Omicron hasn’t been reported in either Zimbabwe, Namibia, Lesotho, or Mozambique. This was acknowledged by Chief Medical Adviser Dr. Anthony Fauci during the conference.

He said, “I have a question on–,” but Psaki ignored him to call on Patsy Widakuswara, a reporter for Voice of America.

Ateba kept pressing, but Psaki talked over him.

“Let–let Patsy–I just answered it,” she said. “Simon, I answered a question on this. Let–let’s let Patsy ask a question.”

Psaki refused to call on Ateba for the remainder of the conference, according to the transcript on the White House website.

Watch an excerpt of the conference here —