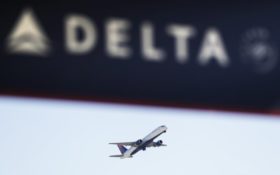 Passengers on a Delta Air Lines flight from Atlanta, Ga., to Baltimore, Md., on Monday afternoon were thrown into a panic after the passenger plane malfunctioned mid-flight.

The near-150 passengers texted family members and loved ones, fearing the worst.

Some passengers watched in horror as a fiery orange ring came from within one of the jet engines.

Then, the engine failed.

One passenger, Tyler Kreuger, captured the entire incident on his phone.

“I just pulled out my phone and I knew I didn’t have service but I just texted my mom … I love you,” Kreuger told local station WMAR.

You can watch video of the stunning moment below:

A Delta flight from Atlanta to Baltimore had to make an emergency landing in North Carolina after one of the plane's engines failed.

“After we heard the boom we just saw all this smoke come up into the cabin, and that’s when we really started freaking out,” passenger Avery Porch, Krueger’s girlfriend, also told WMAR. “It started slowing down a little bit, it started getting hot (and) air cut off.”

According to CNN, Delta Flight 1425 landed around 2:20 p.m. at Raleigh-Durham International Airport.

Shortly after, alternate flights were booked to Baltimore. No one was hurt during the incident.