[Watch] Ocasio-Cortez loses it during House hearing - The Horn News 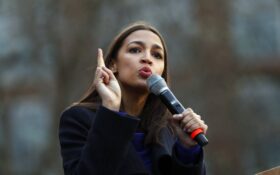 Rep. Alexandria Ocasio-Cortez, D-N.Y., and her colleagues lost their cool in a heated exchange during a House Oversight Committee hearing on Thursday.

And we have the explosive video.

Rep. Clay Higgins, R-La., had some tough questions for far-left environmental activist Raya Salter during a hearing on climate change — and Ocasio-Cortez wanted to let him know that she didn’t appreciate his tone.

Salter raised her voice and refused to answer Higgins’ questions when she was asked what she’d do with the plastics and other products she owns made with oil and gas.

An angry Salter told Higgins to “search your heart and understand why the EPA knows that toxic petrochemical facilities are some of the most toxic polluting facilities in the world and are killing Black people throughout Louisiana.”

Take a look at the fiery exchange —

Here's the heated exchange between Rep. Clay Higgins (R-LA) and Raya Salter, who is executive director of the Energy Justice Law and Policy Center.

That back-and-forth sent Ocasio-Cortez off the edge.

“In the four years that I’ve sat on this committee, I have never seen members of Congress, Republican or Democrat, disrespect a witness in the way that I have seen them disrespect you today,” Ocasio-Cortez said.

“I do not care what party they are in,” she said. “I’ve never seen anything like that.”

“For the gentleman of Louisiana and the comfort that he felt in yelling at you like that?” Ocasio-Cortez continued. “There’s more than one way to get a point across.”

“And frankly, men who treat women like that in public, I fear how they treat them in private. We can be better than this,” she said sternly.

“We don’t have to resort to yelling.”

"Men who treat women like that in public, I fear how they treat them in private. We can be better than this." pic.twitter.com/tZfTKoI29p