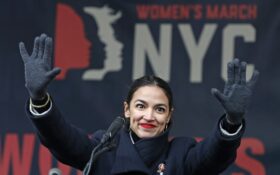 Many centuries ago, an inspired political commentator saw the fall of a glorious leader and exclaimed, “How are the mighty fallen!”

Today, the same eulogy might be spoken over the political career of Rep. Alexandria Ocasio-Cortez, D-N.Y.

Barely four years after DNC leaders named her “the future of the Democratic Party,” AOC is being heckled, jeered, and booed off the stage at her own events…by audience members who say she’s an establishment hack steering the globe toward World War III.

Far-left political activists shouted AOC down, calling her a “coward” and a tool of the “establishment” during a town hall meeting Wednesday night.

“Congresswoman, none of this matters (if) there’s a nuclear war! You voted to send arms and weapons to Ukraine,” a pro-Putin socialist yelled. “Tulsi Gabbard, she’s left the Democratic Party because they’re a bunch of war hawks,” he continued. “You ran as an outsider, yet you’re…voting to start a third nuclear war with Russia and China. Why are you playing with the lives of American citizens?”

As she tried to duck the question, another activist’s voice called out: “You’re a coward!”

“Tulsi Gabbard has shown guts where you’ve shown cowardice!” said the second activist. “You are the Establishment.”

“I believed in you, and you became the very thing you sought to fight against,” he said.

That had to sting the once-mighty Bronx radical. Not many years ago, AOC was leading the protests as part of the Democratic Socialists of America (DSA) and staging sit-ins at the office of Nancy Pelosi.

She immediately burned through all that goodwill with her multi-trillion-dollar “Green New Deal,” and Pelosi brought her back into the fold.

Today, she’s falling in line, doing as she’s told…and bearing the brunt of the humiliation.

My friend @JosBtrigga was just locked out of his account after him and I confronted AOC on her support for nuclear war. As usual, Twitter shows itself to be an enemy of free speech and expression pic.twitter.com/ABXfcO8d73

The congresswoman tried to put the activists on the defensive. “You are being rude!” AOC said.

Cry me a river, congresswoman.

Progressive journalist Glenn Greenwald remembered how AOC once insisted, “The whole point of protesting is to make ppl uncomfortable.”

These citizens of color protesting AOC are angry and scared because she's risking their lives in a possible nuclear exchange by sending billions to CIA and Raytheon for Ukraine.

Her response? God, you don't need to be so ruuude about it!😠

What happened to this viral manifesto? pic.twitter.com/J9g65wQhzH

For making AOC look like a fraud, it wasn’t long before one of the congresswoman’s critics felt the sting of censorship.

“My friend @JosBtrigga was just locked out of his account after him and I confronted AOC on her support for nuclear war. As usual, Twitter shows itself to be an enemy of free speech and expression,” one of the far-left activists tweeted on Thursday.

My friend @Noggatone and I confronted Congresswoman @AOC on her support for Nuclear War and Ukrainian Nazis. I call her out for being a coward in the face of the party that will push us all into Nuclear war right now. Will she stand up like @TulsiGabbard and fight for peace? pic.twitter.com/aQiQvQSWIN

But the clip has already gone viral, being played on television dozens or hundreds of times.

In May, the far-left Greenwald called out AOC for supporting a “$40 (Billion) War Package to Raytheon and CIA.”

Outright socialists have sounded off against AOC, Ilhan Omar, Rashida Tlaib, and other members of the socialist Squad and their fellow travelers.

“In mid-May, the Democratic Socialists of America (DSA) congressional slate voted unanimously for a $40 billion bill endorsing the US-led proxy war against Russia. No member of the DSA delegation issued a public statement explaining their vote, and none even so much as tweeted to defend their actions. The DSA evidently hoped that nobody would notice,” wrote the World Socialist Web Site. “The DSA is not fighting the horrors of war, it is funding them.”

“The DSA’s vote for the $40 billion military aid bill…has brought the world to the brink of nuclear catastrophe,” wrote WSWS author Eric London—in May.

It’s hard to know what AOC believes about war—if she believes in anything other than power, luxurious living, and getting more Instagram followers—but she once claimed to be a voice of “peace.” Now, she’s backing Biden’s Armageddon-of-choice and sending bails of cash from a recession-riddled America to defend Ukraine’s borders.

Once, she yelled down phonies, liars, and career politicians from the audience. She convinced her district that, if they’d elect her, she’d be different.

Now, they’ve seen through her. Can it be long before she’s back in the crowd, with nobody following her this time?

How the mighty are fallen, never to rise again.