Ocasio-Cortez is FINISHED thanks to THIS brutal video (ouch!) - The Horn News 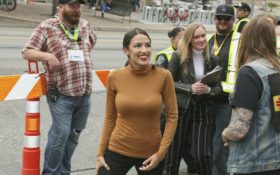 Rep. Alexandria Ocasio-Cortez, D-N.Y. found out Thursday that she has her head so far up in the clouds that she’s lost all touch with reality — and voters in her home district are very, very mad.

Turning Point USA, a non-profit movement aiming to instill conservative values in millennials, traveled deep into Ocasio-Cortez’ district in New York City to ask her residents just how they felt about socialism and their Congresswoman’s ideas.

What they said was brutal.

Almost every single voter that was surveyed said that socialism is awful.

Considering Ocasio-Cortez’ outspoken embrace of Democratic socialism, this is very bad news for her re-election hopes.

One man that was asked about wealth distribution dropped a truth bomb on the deeply flawed radical system:

“If you give everybody anything, they could just stay home: what’s the point?” he asked. “What’s the drive? And that’s why socialism is not right for America.”

A man close by decided to chime in: “All socialism does is encourage people just to sit back and do nothing. I’m against freeloaders. You gotta work. You gotta earn it.”

Another man standing outside of a restaurant made the point that he wants capitalism because he’d like to be rewarded for his hard work.

“I don’t agree with socialism,” he said. “Socialism is supposed to be like when everybody gets the same amount — I wanna do better than people if I work harder.”

Journalist Benny Johnson did manage to meet one person who claimed he was a fan of socialism.

But like Ocasio-Cortez, he embraced socialism… but dressed in expensive, designer sunglasses and drove away from the interview in a Mercedes-Benz!

“That is a socialist lifestyle right there,” Johnson joked, “Drive away in a Mercedes 300-class in your custom Armani glasses.”

The first man featured on the video said that he was born in a socialist country and suggested that he came to America to escape all the horrors that Ocasio-Cortez is trying to spread.

“I came to this country to get away from socialism,” he said. “Yugoslavia.”

Do People Living In @AOC ’s District Actually Like Socialism?

AOC is America’s most popular socialist.

So what do her constituents think about the socialist ideology?

I went to New York’s 14th District to find out.

Their answers will surprise you! ????????pic.twitter.com/zOUzACLRFk