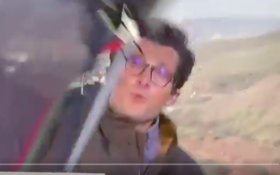 MSNBC reporter Jacob Soboroff was live on the air at the scene of a potentially dangerous border area of the U.S.-Mexico border.

But his life wasn’t in danger for that reason.

Instead, it was an equipment accident that almost crushed the MSNBC reporter’s head.

Soboroff had been in Otay Mesa, California, speaking with colleague Craig Melvin when a gust of wind swirled through and blew a light fixture down which almost came crashing onto the reporter.

You can take a look at the incident below:

And you almost just cut your head!! Good save. #livetv #sandbags pic.twitter.com/pBkmap9APB

Luckily, Soboroff seemed to see the disaster coming and avoided much harm, continuing the interview in stride.

“Craig, happens sometimes at a breezy border location,” he said, regaining his composure.

Melvin would go on to commend Soboroff, saying of the incident that it was “a wide ranging interview that nearly cost you your life there, it would seem. Jacob Soboroff, unflappable as always, my friend.”

The episode occurred as President Joe Biden is facing calls to deal with a renewed border crisis.

This week, reports surfaced photographs of illegal immigrants at the border wearing campaign-style shirts that read, “Biden, please let us in.” It is said to be part of a much larger, renewed effort by illegal immigrants to gain access to America post-Donald Trump.

Critics on both sides of the aisle have been chirping about the administration’s handling of surging border crossings, a purported record projection of unaccompanied children expected to arrive at the border, and the detaining of children in trailers.

But Biden insists that the administration will be able to solve the problem.

“… we’ll be able to handle it,” Biden assured reports.

Whatever you say, Joe.