WATCH: Maxine Waters was very unhappy about this... - The Horn News 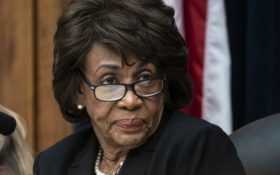 Former FTX CEO Sam Bankman-Fried did not appear before the committee. He was arrested in the Bahamas hours before he was set to appear, and is fighting extradition to the United States.

FTX’s current CEO John Ray, who has replaced the embattled Bankman-Fried, appeared instead. During the hearing, Ray admitted that “FTX commingled customer funds with the FTX Foundation and affiliated nonprofits to advance SBF’s vanity projects and progressive causes” and that there were “absolutely no internal controls” regarding record keeping.

He said FTX’s recording keeping is “one of the worst from a documentation standpoint. Even in the most failed companies you have a fair roadmap of what happened,” Ray said. “We’re dealing with literally, sort of a paperless bankruptcy, in terms of how they created the company.”

“It makes it very difficult to trace and track assets particularly, as I’ve said, in the crypto world,” he said. “It’s really unprecedented in terms of the lack of documentation.”

Waters later attempted to end the hearing prematurely and had a heated exchange with Rep. Lance Gooden, R-T.X.

Gooden repeatedly tried to get the attention of Waters, the House Financial Services Committee’s chairwoman, as she tried to end the questioning before he had his chance to interview Ray.

Check out the explosive exchange here —

Lmfao Rep. Maxine Waters tried to end the FTX hearing before Rep. @Lancegooden got a chance to question the witnesses, who had to remind her that all the members of a committee are entitled to questions. pic.twitter.com/wYTxSsLVg3