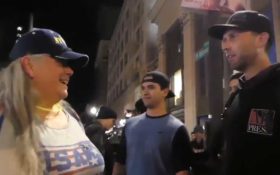 A leftist protester verbally assaulted a 9/11 widow last weekend in Portland, Oregon telling the woman that her husband “should rot in his grave.”

The alt-left “Antifa” protester was later seen running away in fear when a right-wing protesters confronted the man over his statement.

The incident allegedly occurred on Oct. 13 after “a conservative group organized a ‘flash march for Law and Order,'” The Washington Post reports.

The widow was standing on the sidewalk waiting to cross the street when she was approached by the angry protester who shouted at her, “Why are you trying to block me? I’m f**king trying to walk here.”

She responded, “Because I obey traffic signals.”

The woman then turned around and pointed to her NYPD hat and said, “My husband died on 9/11.”

“Good for him,” the man responded. “Good, good. NYPD was a bunch of sodomizers, f**king sodomizing immigrants with their bully sticks.”

“So yeah, your husband, should probably f**king rot in the grave.”

You don’t hear Governor Cuomo and Mayor D’Blasio condemning violent behavior. Why? Because they are part of this mob behavior. pic.twitter.com/RjgRUMeE9I

The same alt-left protester who felt empowered harassing the 9/11 widow was later confronted by a group of men “Proud Boys” group — and he was terrified.

After several back-and-forth exchanges, a large man began walking across the street towards the leftist protester saying, “You calling my mom out?”

The protester then quickly runs away in fear.

“Why you running?” asks the counter-protester.

THIS VIDEO WILL MAKE YOUR DAY!

WATCH: Antifa Bully that attacked the woman whose husband died during 911 attack is confronted by her MASSIVE son and he TAKES OFF RUNNING! pic.twitter.com/GtusJQndFD

The breakdown of basic civility is the fault of top Democrat leaders calling for violence in the streets — and are further examples of why it is important to get out and vote in the midterm elections.